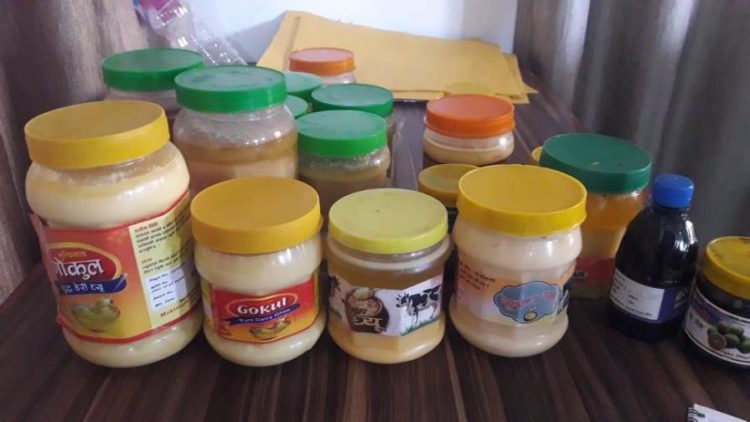 Bottles of ghee (clarified butter) whose real manufacture place is not known yet but still available in market.

Pokhara, Jan 12: #1 A team from the Directorate of Industry, Commerce and Consumer Protection Gandaki found unlabeled ghee (clarified butter) while monitoring the market during the Tihar festival. The monitoring team could not find out where the ghee with Gokul brand was produced. Out side the some containers the production place was printed as  Ramechhap and some have Tokha municipality as address. Such ghee is still widely available in the market.

#2 The Directorate has determined the price of purified bottled water by fixing the retail  price at Rs 16 per bottle (1 litre) and Rs 50 per jar (20 litres). But shopkeepers are charging more than that.

#3 The price of one bag of rice bought at Rs 2,750 in the morning was sold at Rs 3,000 in the evening at the same shop during lockdown. Consumers were aware and shopkeeper were made to apologize.

All the 3 levels of government, civil society and non-governmental organizations are working for the rights of consumers. However, the distortion of the market has not stopped. On the contrary, it has increased. Who is to blame for this? After all, who controls the market? The Directorate of Industry, Commerce and Consumer Protection Gandaki has started an awareness program to stop the distortion of the market.

Director Narayan Acharya said that in the first phase, the program will be held in all the wards of Pokhara and then in other districts of the province. Although many issues related to consumer interest are mentioned in the law, the entrepreneurs are taking advantage of the situation by blackmailing the consumers, said Director Acharya.

Although many issues related to consumer interest are mentioned in the law, the entrepreneurs are taking advantage of the situation by blackmailing the consumers

Chairman of the Consumers’ Forum Gandaki Kapil Koirala said that the Consumer Rights Protection Act 2018 has been implemented but its effective implementation has not taken place yet. He said that consumers are being looted  via expired food items, high prices and low weight packaging.

Consumer Rosy Parajuli, who participated in the program, said that consumers are being cheated by the sellers every day due to lack of effective monitoring. She also drew the attention of the concerned bodies to make the awareness and market monitoring effective by setting up a mechanism from the ward level.

According to Pradip Kumar Regmi, an official of the directorate, representatives from wards 1 to 5 have been involved in the awareness program in the first phase. The program will be extended to all 33 wards in a phased manner. He said that the program will be conducted as a campaign in all 11 districts after completing the campaign in metropolis.