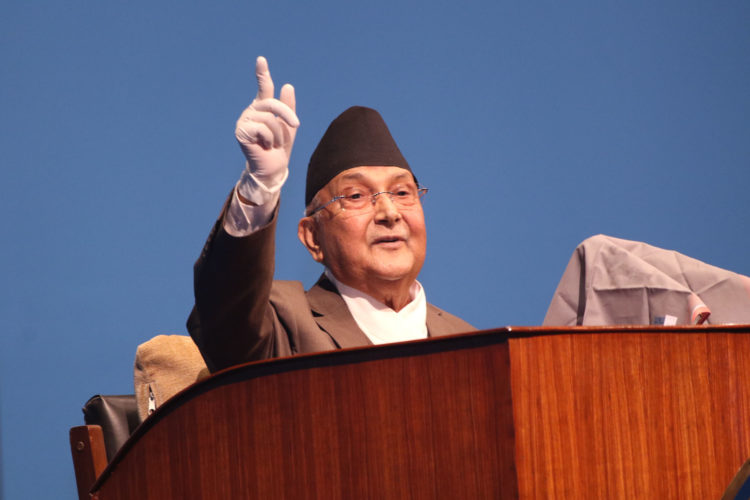 Kathmandu, Sept.25 : Prime Minister K P Sharma Oli has reaffirmed that the government in Nepal was investing in people in line with the national aspiration of ‘Prosperous Nepal, Happy Nepali’ to eliminate poverty in all forms and ensure prosperity.

PM Oli said so in his address through a pre-recorded video, to a high-level side event titled ‘Poverty at a Crossroad: Using Leadership and the Multidimensional Poverty Index to Build Back Better’ in the event organized on the margins of the 75th Session of UN General Assembly Thursday morning.

On the occasion, PM Oli asserted that the national commitment for promoting economic growth was based on equity and social justice and the government of Nepal was committed towards ending all forms of discrimination and deprivation in all manifestations, reads a press statement released by the Ministry of Foreign Affairs.

Shedding light on the government’s targeted programs on reducing poverty, illiteracy, and unemployment, the Head of the Government of Nepal shared, “Nepal has been successful to reduce absolute poverty more than one percentage point every year for some years now through government targeted programmes for income generations, micro finance services and inventions of cooperatives and community organizations.”

Oli further outlined the efforts made towards improving delivery of essential services including universal access to renewable energy, basic water supply and sanitation and informed that more than one third of the over 30 million population of the country was covered by one type of social protection or the other.

“With only a decade left to achieve the 2030 Agenda, progress made in poverty reduction should be a primary indicator of assessing our overall development efforts,” assessed the PM, asserting that investing in people and preventing them from re-lapsing into poverty would be a key challenge amidst the current health and economic crisis.

According to him, progress in poverty reduction should be a primary indicator of assessing the government’s overall performance as a decade left to achieve the global goals of sustainable development.

In the event that was co-hosted by the Governments of Chile and Pakistan in collaboration with Multidimensional Poverty Peer Network and United Nations Development Programme, he highlighted Nepal’s approach of looking at poverty as a multidimensional problems and observed, “We are committed to ensuring that no one remains hungry and no one dies of hunger.”

Participating in the event were Presidents of Afghanistan, Chile, Costa Rica and Honduras, Vice President of Ecuador, and Prime Minster of Pakistan among others who also delivered their remarks, according to the press statement.