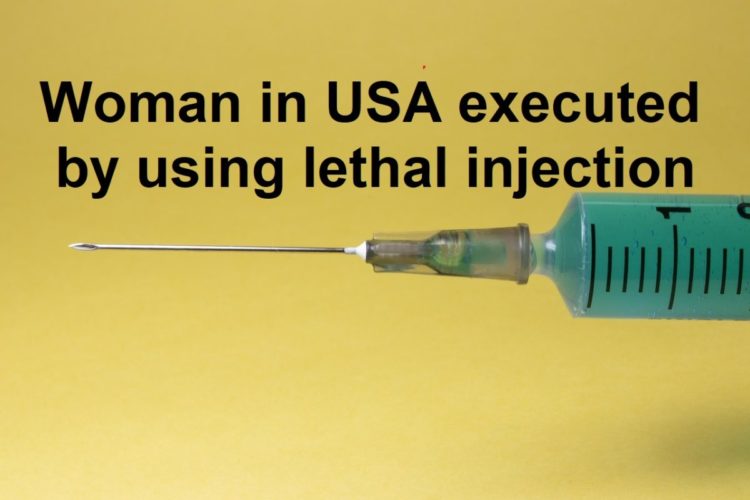 Washington, Jan 13: An American woman who murdered a pregnant dog breeder in order to steal her baby was put to death by lethal injection Wednesday, becoming the first female to be executed by US federal authorities in nearly seven decades.

The US Justice Department said Lisa Montgomery, 52, was pronounced dead at 1:31 am Eastern Time (0631 GMT) at a penitentiary in Terre Haute, Indiana.

It said the execution was “in accordance with the capital sentence unanimously recommended by a federal jury and imposed by the U.S. District Court for the Western District of Missouri”.

The US Supreme Court cleared the way for Montgomery’s execution just hours earlier — despite doubts about her mental state — after the government of President Donald Trump had pushed for the application of the death penalty.

Montgomery’s defenders did not deny the seriousness of her crime: in 2004, she killed a pregnant 23-year-old in order to steal her baby.

But her lawyer Kelley Henry, in a statement, called the decision — the first for a female inmate since 1953 — a “vicious, unlawful, and unnecessary exercise of authoritarian power.”

“The craven bloodlust of a failed administration was on full display tonight,” Henry said. “Everyone who participated in the execution of Lisa Montgomery should feel shame.”

The execution came after a legal back-and-forth that ended with the country’s highest court allowing it to proceed. Unable to have a child, Montgomery carefully identified her victim — 23-year-old dog breeder Bobbie Jo Stinnett — online.

Under the guise of buying a puppy, Montgomery went to Stinnett’s home, where she strangled her and cut the baby from her body.

In 2007 she was convicted of kidnapping resulting in death and handed a death sentence. Her defenders believe that she suffered from severe mental health issues stemming from abuse she suffered as a child.

She did not understand the meaning of her sentence, they said, a prerequisite for execution.