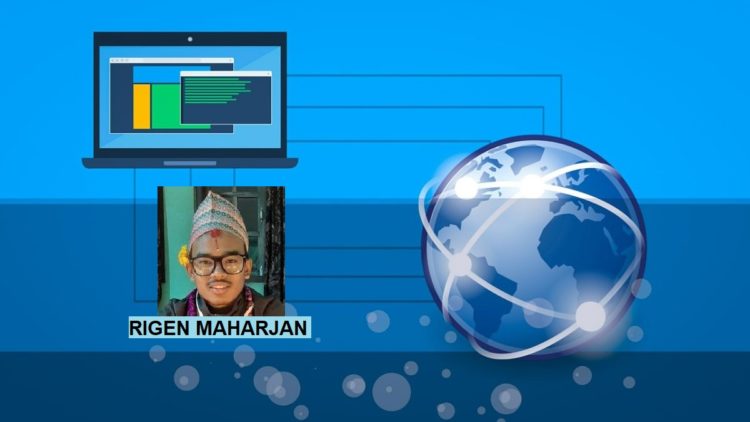 Rigen Maharjan: Technology is a concise term. Its scope is way too vast to be summarized in a few hundred words. There always has been an evolution of technology, there always will be. The lifestyle of an urbanized person today is vastly different from that of 1000 years ago. If you can afford it, 9 out of 10 young people surely do have a smartphone. The restlessness a few minutes of internet disconnection causes to an average person in today’s age should explain it pretty well.

The Internet has been a great boon for sure. The availability and reach of information from one place to another place has not only sped up but the quality preservation of the information has been ensured as well. There are many skills you can learn for absolutely free on platforms like YouTube. The number of communication platforms, also known as social media, has increased. Banking, Marketing, Engineering, Education, Security, eSports, Transportation, and many other sectors have already seen a huge boost due to the internet.

The availability of resources has narrowed down the gap between the urban and the rural world that was previously wide. Especially the video-sharing platforms like YouTube, TikTok, Instagram Reels, etc. have made it much easier to showcase your talent and gain recognition. There are people who have built up their careers on these platforms and have a huge fan following and making an excellent living out of it. Most notably comedians, game streamers, musicians, motivational speakers, actors, online tutors, etc.

Online harassment, bullying, spreading rumors, sending out threats have resulted in suicides, depression, and even riots in some places.

But like anything else, it has some drawbacks, and in some cases, has been proved fatal. The privacy of a person on the internet is constantly at risk. While the flow of information mostly is a good thing, but there have been a lot of cases where misinformation or even dangerous texts have flowed. Online harassment, bullying, spreading rumors, sending out threats, disclosing personal information of people through various ways have resulted in suicides, depression, and even riots in some places.

Political parties have used social media to set up IT cells to influence people for votes, and oftentimes they have spread fake news. The censoring of adult material has been very poor; thus, children often get exposed knowingly or unknowingly to the adult content which in turn hampers the effectiveness of sex education in them. Also, due to the advent of short-form video sharing platforms like TikTok, the attention span of young people has considerably decreased as people enjoy the ease of swiping left/right when the content doesn’t, please them in the first 2-3 seconds.

Over 50% of the national population of Nepal now has access to cellular networks and the internet penetration should be in that vicinity as well. Every rose has its thorn, and most of the time the people get to choose if they want the flower, or the thorn. The problems have been proper censoring, data privacy, and inadequate fact-checking. Slowly, the big social media platforms are making good progress in solving these problems. Make no mistake, there will always be problems no matter how water-tight the platform may be. Just like the internet is a great tool for people who want to use it as a tool. It also has its drawbacks. You get to decide what you want.