Six dead, 23 missing in floods and landslides, many airlifted

Six dead, 23 missing in floods and landslides, many airlifted 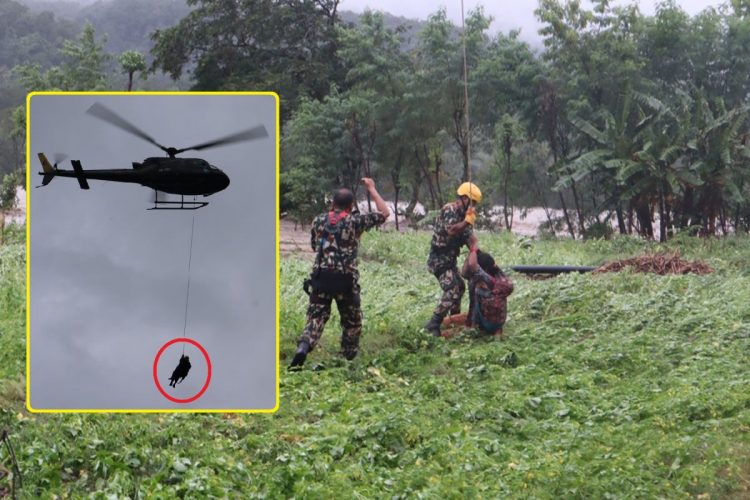 Far-West: At least six persons died in the incidents of rain-triggered flood, landslide and inundation in different districts of the country. Five others were injured.

A helicopter was flown from Surkhet district to airlift  the 4 people stranded in between Mahakali rver.

According to the Home Ministry, as many as 23 people have been reported missing in the landslide incidents. Chief of National Disaster Risk Reduction and Management Authority, Anil Pokharel, said those deceased in the incidents are one each in Kalikot and Dadeldhura, two each in Doti and Sunsari districts.

As many as 23 people of seven houses of Thalara rural municipality-4 in Bajhang district went missing in the landslide. Details of loss and damage have not been received yet due to disruption of electricity and telecommunications in the area, Pokharel added.

The rescue team brought back two children and three adults from Masetti of Bhimdutta Municipality-9 in the district after they were stranded due to the flooded Mahakali River for 22 hours.

Assistant Chief District Officer of Bajhang, Ramraj Gautam, said a team of police personnel has yet to reach the landslide-torn site in Bajhang. However, more than 500 people were rescued so far from different districts, including Kanchanpur. As of now, 19 districts have been affected in the incidents of flood, landslide and inundation.

Traffic route along with power supply and telephone services have been disrupted in 15 out of 19 districts. As informed the landslide has caused huge loss of properties in the districts.

The water current of the Mahakali River has increased to nine meters while its danger level is measured in seven meters.

After the country’s western region saw big loss of lives and properties due to flood, landslide and inundation, an emergency meeting of the disaster management took place at the Home Ministry on Tuesday evening.

On the occasion, Home Minister Bal Krishna Khand directed the subordinate agencies of the home ministry to mobilize people in the relief and rescue operations, keep the displaced in the safer areas and ensure smooth services of electricity and telecommunications. The minister also directed to keep helicopter on standby for rescue operations in the disaster-hit areas.