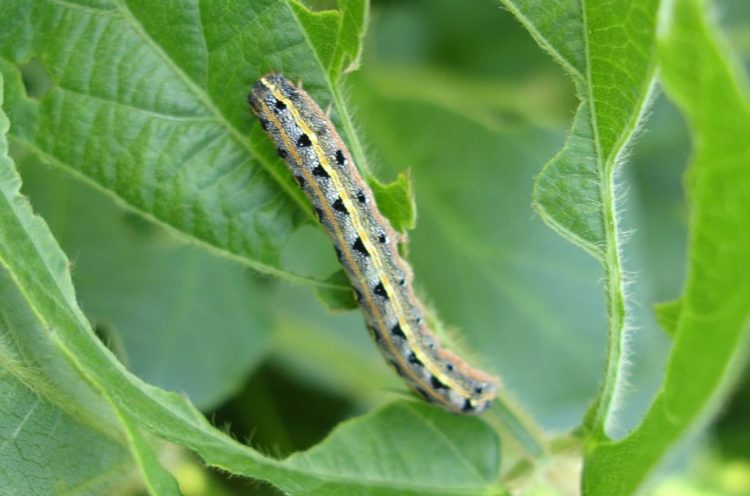 Krishna Acharya, Chitwan, Oct.1: The National Maize Research Programme based in Rampur of Chitwan has embarked on undertaking a research for the prevention and control of fall armyworm – a type of agricultural pest which has posed a serious threat to their grain outputs.

The agriculture scientists and technicians have been hell bent on carrying out the research to control the pest which has been sporadically broken out across the country. The researchers are collecting larvae of the armyworm for research.

Swarms of the fall armyworm which entered Nepal in the previous years have destroyed corn crops across the country. Research Programme scientist Ghanashyam Bhandari said that they have collected larvae of the notorious caterpillar species so as to lessen the loss the pest can inflict.

Larvae of the worm are more active during the night. It lays eggs on the surface of lower leaves but sometimes on the upper part of leaves. As informed the worm lays 150-200 eggs on the corn leaves. Bhandari shared that the worm can lay 1,500 to 2,000 eggs during its life span of 15-21 days.

“Collecting its eggs would therefore be instrumental in preventing the spread of the worm”, he said, adding that it would lessen the damages and reduce the use of chemical pesticide”.

There are 150-200 eggs on the surface of the leaf so plucking the leaves with larvae and its proper management can prevent the worm from inflicting much damage, Bhandari further explained.
The first case was reported from Nawalparasi district of western Nepal on May 9, 2019.

Because the pest’s favourite, maize, is the second most cultivated food crop in terms of area and production after rice in Nepal, the caterpillar may infest the entire farmland across the country.
The National Maize Research Programme was initiated in Rampur in 1962.

As part of the programme, research and development of various species of maize has been undertaken in the area stretching over 65 bighas of land.

“Different 55 types of worms inflict damage to the maize. We are undertaking research to prevent the intrusion of pests”, he said, adding the research has come up with some positive findings.