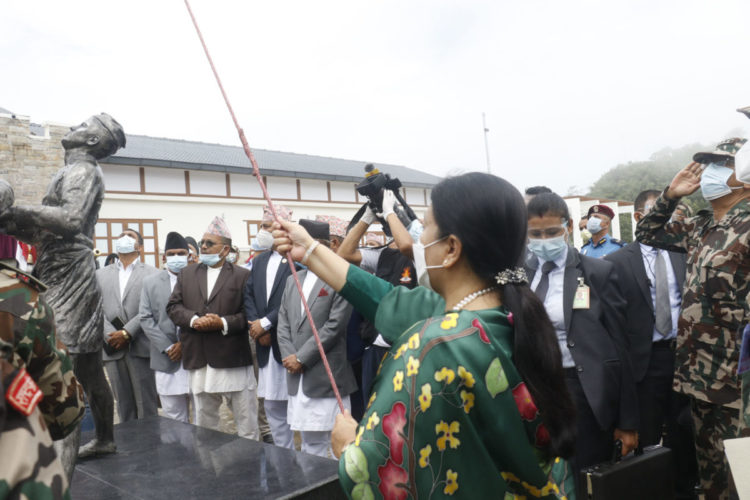 Sindhuli: The Nepal Army-initiated construction of a war museum has come to a final shape.
President Bidya Devi Bhandari  inaugurated the museum today. Nepal Army had constructed the museum building at the cost of around Rs 70 million.

A contract was signed with New Dragon Siddhagadhi JV Koteswor for the construction of war museum. The architect of the design was developed by Architechnic Development. Likewise, the interior design and decoration was made by Dhulikhel-based Alternate Infrastructure Pvt Ltd.

The museum has displayed portraits of the war-time characters, timeline of Sindhuligadhi war, warfare from the military lens, documentary of Sindhuligadhi war, pictures of phase-wise war, domestic weapons used in the then wars, war-time arms, arms and ammunitions used by British troops, Nepali warriors, British warriors, painting of Nepali warriors, Mithila art, monument built before the names of British warriors, wartime stone carvings and historical documents. A library has also been set up as part of the museum.

The construction of the war museum was initiated in January 2019 A.D.at Sindhuligadhi, a historical site carrying the legacy of the defeat of the British army during the unification of Nepal.

According to knowledgeable people, Gorkha troops under the command of Banshu Gurung had defeated the well-equipped British troops led by Captain George Kinloch in famous Sindhuligadhi battle in 1767 AD.