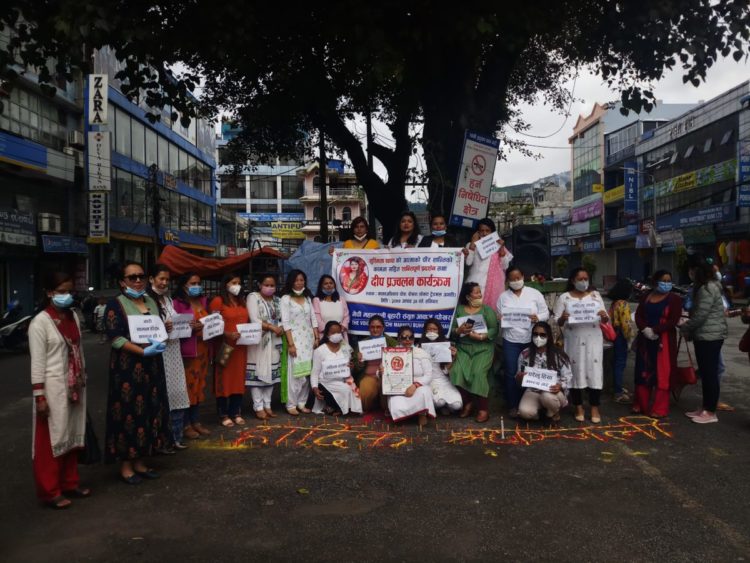 Pokhara, July 11 : A candle lighting peaceful  program was held today morning in Manabadhikar Chowk of Pokhara in the memory of Sushmita Thapa (24) by ‘The voice of Mechi Mahakali Buhari (Pokhara)’ were a number of females from the valley participated.

Sushmita was found dead inside her kitchen on 14th June 2020 in Hetauda Sub-Metrapolitan City – 4, where her father-in-law Prakash Thapa (58), mother-in-law Tulasa Thapa (50), and sisters-in-law Durga Thapa (27) and Sita Thapa (23) were arrested on the charge of murdering.

The investigation by the Makwanpur Police stated that the murder was planned to claim insurance money of Sushmita’s deceased husband, Rependra Thapa.

‘The program is conducted with the intention of awaking people against women violence along with a message to Nepal Government to punish the murderers accordingly”, said Mrs. Tara Sharma the attorney of the Voice of Mechi Mahakali Buhari (Pokhara).

Mrs. Manu Sharma, the vice president of the Voice of Mechi Mahakali Buhari (Pokhara) quoted that the violence against women must be stopped right from our houses, as there is no difference between daughter and daughter-in-law.

‘Day by day the women violence is increasing in the context of Nepal and the voice must be heard so that the occurrence of these kinds of event will minimize,’Ganga Barayeli, the advisor of the Voice of Mechi Mahakali Buhari (Pokhara).