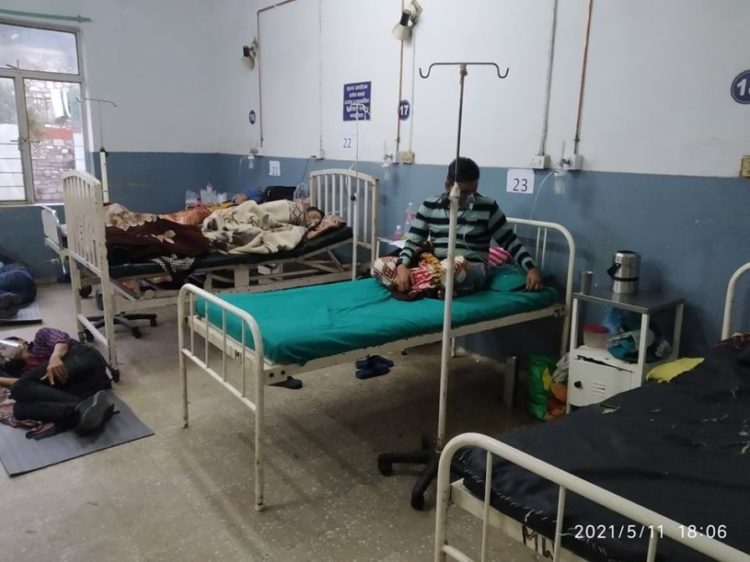 Dhan Bdr. Gurung, Pokhara: “Manipal’s life : Admission Rs 60,000, doctor charge per day Rs 22,000, one medicine Rs 12,000,  other medicines 15,000 and expense for relative. It is  difficult for ordinary people to live.”- This was the facebook status of  journalist Padam Shrestha on Sunday.

His 78-year-old grandmother has been in  Manipal Teaching hospital since Saturday after being infected with a corona. He said that he brought her in Manipal as it has oxygen facility  but its too was very expensive. He said that more than Rs 1,50,000 has been spent in just 3 days.

Gandaki Province assembly member Man Kumari Gurung paid around Rs 60,000 a day at Charak Memorial Hospital after she tested positive for corona on April 27. After paying Rs 58,000 for one night in Charak, she was shifted to Gandaki Medical College (GMC) from the next day. She said that she is now resting at home  after paying a high charge in GMC too.

Treatment of corona in private hospitals including Charak Memorial, Gandaki Medical College and Fishtail Hospital in Pokhara is more expensive than the capacity of an ordinary citizen. Therefore, the general public is looking for government isolation. But as the graph of corona infections is raising up, government isolation is filling too.

Isolation is being made targeting 200 infected people.

Covid isolation of 50 beds in the Infectious and Communicable Diseases Hospital under the province and the Western Regional Hospital (Gandaki Hospital) under the Pokhara Institute of Health Sciences has become ‘houseful’.

Professor Dr. Arjun Acharya said-“As the number of infected began to increase, the Western Regional Hospital decided to convert the newly constructed maternity and child ward building into Covid Hospital. But the isolation has not been ready for a long time. Isolation is being made targeting 200 infected people.”

He admitted that the work including tender/quotation was delayed. Although the hospital is under the federal government, province government is involved in isolation tenders and quotations. He said that the work was being delayed due to the gas pipeline arrangements. “We are still in the process, it will take another week and a half,” he added.

Focal person, Sharad Chandra Baral said they have planned to treat the corona infected patients on the upper 2 floors of the 3-storey building and start OPD service on the ground floor. He further said that though the beds were ready, it was delayed due to the connection of oxygen pipeline.

The state government has decided to provide Rs. 6.2 million to the Western Regional Hospital to help in the treatment of Corona infected patients.

Minister for Social Development Naradevi Pun informed that the meeting of the Province Covid-19 Crisis Management Committee held on May 2 decided to provide the amount for the purchase of necessary goods. Preparations were also made at the same time to ask the federal government to provide 150 nurses.

Spokesperson of Gandaki Province Corona Control and Prevention Program, Dr. Binod Bindu Sharma informed that about 100 beds have already arrived from the federal government. “The federal government has already sent 100 HDU beds  worth Rs 126 million to Gandaki Hospital,” he said.