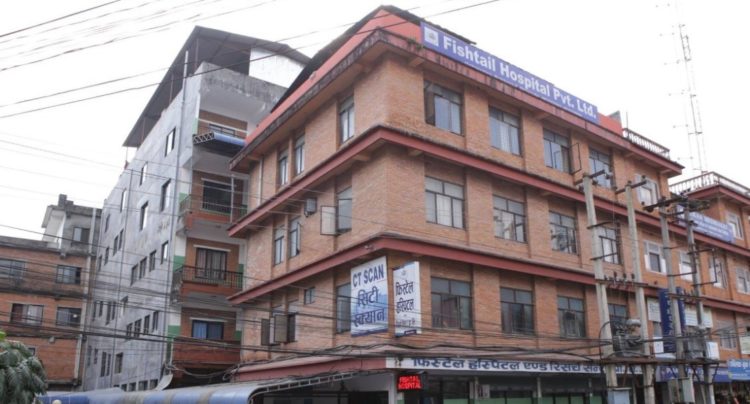 Fishtail Hospital in Gairahapatan Pokhara where a woman infected with corona virus had died.

Bijay Nepal, Pokhara, Sept.13: At least 200 people who attended a funeral ceremony of COVID-19 infected woman from ward no.5 have started staying in quarantine following the order  issued by Gandaki Health Directorate.

Forty five year old woman who was also a patient of blood cancer was admitted in Fishtail Hospital and breathed her last at 1:15 am on Friday

Though her swab sample was taken on Thursday, the hospital submitted the body to their family on Friday and didn’t bother to wait for the report.

Hospital insisted her family that she died of blood cancer. Then they received the body and  conducted the last rites on Saturday in Ramghat on the presence of 200 people.

But on Saturday, after performing the last rites, her report came positive.

Following the fear of having infected with corona virus, they have started staying in home quarantine and hotel quarantine.

As the woman was the wife of tourism entrepreneur, many popular faces had attended the funeral ceremony.

Meanwhile management committee president of the hospital Ashok Palikhe said that this happened due to late report sent by the lab. He further said, “Report of  swab sample comes in 5 hrs but report of swab sent by private hospital comes only after 5 days and I came to know about her report via media.”

Dr Binod Bindu Sharma, the director of Gandaki State Health Directorate (GHD) said that it’s a great carelessness from hospital side to submit dead body to family without waiting the test result.

The relatives of the deceased said that hospital should take full responsibility in the matter.