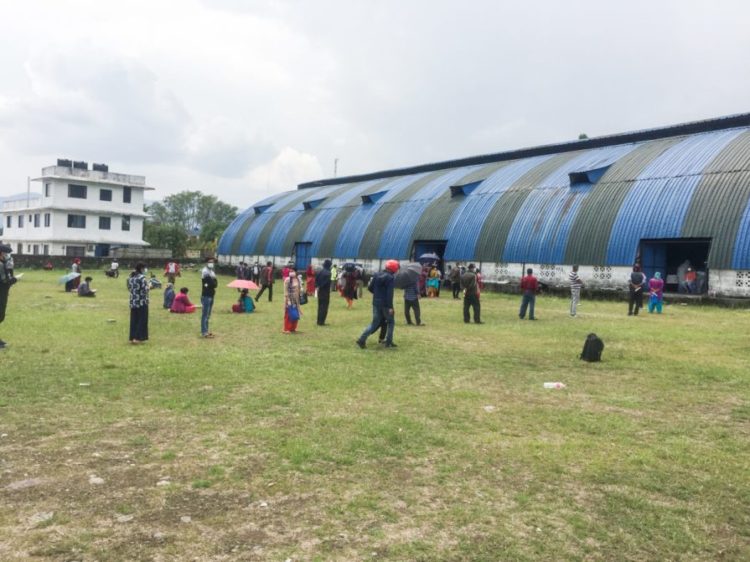 Dhan Bdr Gurung, Pokhara, May 8 : Devi Giri, a resident of Pokhara-16, has been suffering from fever along with cough, headache and body pain for 14 days.

She didn’t like the food as she couldn’t taste it. She went to nearby medical center where she was given some medicines which only stopped her fever. She has been facing those problems since she went to her relative’s wedding on April 23. She used a mask and sanitizer at the wedding. But the physical distance was not maintained.

A few days ago, even her eldest son started getting headache and fever. After seeing the symptoms of corona, they boarded a Red Cross ambulance on Friday and went to the Pokhara Exhibition Center to give a swab.

Shobha Rana of Hemja, who tested positive on April 16, was also waiting for her turn, accompanied by her mother-in-law Parvati Rana. While contact tracing of the family, it was also detected in her mother-in-law too. They are fit now but came in Pokhara Exhibition Centre for the test to be sure about the latest condition.

The Pokhara Metropolitan Health Division has been collecting swabs in two groups recently. On Friday, the branch collected swabs from the exhibition center and Kailash Basic School Hemja.

Swab collection, which started last year, used to be done only from a certain place. Dipendra Sunar, health assistant at the health department, said that the number of patients with corona symptoms has been increasing from two places recently.

According to Sunar, 200-300 swabs have been collected daily since the beginning of this month but earlier they used to collect 15-20 swabs only.

The health department on Thursday collected 383 swabs from the Nayabazar Exhibition Center and the district court in Kaski, said health assistant Sunar. He said that 169 swabs were collected from the exhibition center and 51 swabs from Kailash Basic School Hemja on Friday.

In Kaski, the state health directorate, Pokhara metropolis and private hospitals are collecting swabs. According to the director of directorate, Binod Bindu Sharma, more than 1,000 swabs are being collected daily. Sharma informed that PCR tests are being conducted in the province from TB treatment centers, Pokhara, Baglung and Nawalpur. Swab testing is also being done from a private Lab Life Care Diagnostic Center.