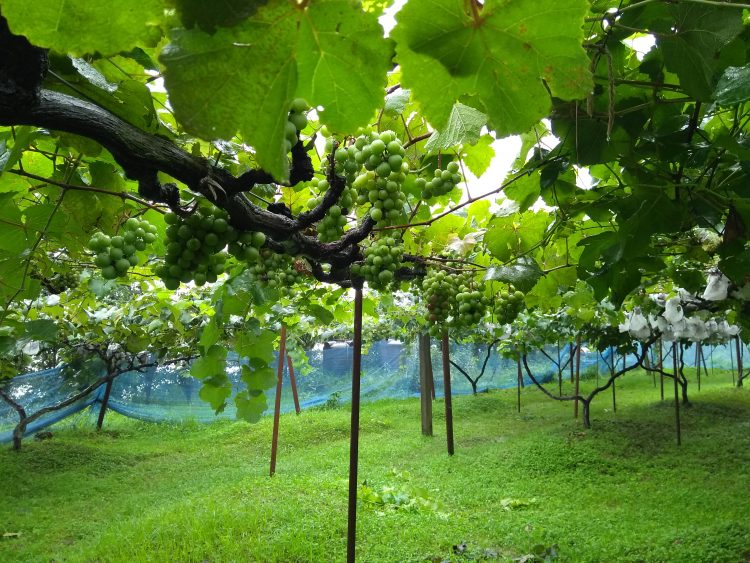 Green and black grapes have begun to ripe in the Pataleban vineyard resort of Kathmandu while grapes from vineyard in Dhading has already  been harvested  to make wine. Among the berries grown in Nepal, grape is considered as the cheapest one. Fortified with vitamin C, grapes are also used to make wine. In July, one can see bunches of grapes hanging in the garden of Pataleban vineyard resort of Kathmandu along with 3 big farms in Dhading district. In 2007 AD, Kumar Karki started the vine farming in Chisapani of Kathmandu after doing research in Japan.  As grapes plant started to give fruits, Kumar also started Pataleban vineyard resort in 2010 AD. Currently the resort is managed by Banyan Tree Nepal via team of hospitality professionals.  It was the resort which made the vineyard popular among the visitors. Then gradually the concept of agro tourism was developed. In 2014,  vineyard started vinification with the investment of Janapal Thapa and Dhruba Khatri along with Kumar Karki.  Pataleban Vineyard is Nepal’s first and only one commercial vineyard in two districts; Kathmandu and Dhading. There is a vineyard vines in Khajura of Nepalgunj agro research centre but  it has not been developed commercially.

Grapes species:  In an interview with Aadarsha Samaj daily, Janapal Thapa, one of the investor and director  of Pataleban winery said “Grapes in  Chisapani are grown in the area of 10 ropanis where as in Dhading, it’s grown in the area of 300 ropanis including Kebalpur, Kaule and Khani khola.”About 25 species of grapes are grown in vineyard. The winery plant in Dhading makes wine every year after the harvest. The popular species of grapes in the farm are: Peony (blue), Muscat Bailey (pink skinned), Phoenix (green) and  Himrod (green). All the sapling of grapes were brought from Europe. Grapes grown in the vineyard are of two types; table grape and wine grape. Table grapes are seedless while wine grapes have seeds. Wine grapes are sweeter but it’s seed gives sour taste as it starts to blend in mouth. Table grapes have less acidity and also have less sugar than wine grapes. High quality wine is made from wine grapes as it has high acidity. It takes 3 years for grape plant to bear fruit and in an average one grape plant gives 5kg of fruit annually. The life span of grape plant is 25 years. Rather than flowers, grapes bears tiny green peas which eventually ripens into the pulpy fruit in between July to August. As Dhading has high temperature due to low altitude (1000m), the budding in 3 farms starts in February and grapes are picked by July. In Kathmandu (1550m), budding starts in March and grapes are harvested by August.  As grapes starts to become bigger they are enclosed by net to protect from birds (see in photo, bird with grapes on it’s beak). The resort located on the lap of Pataleban community forest organize grapes picking event during harvesting season July/August.. One can go in monsoon trip to see vineyard and enjoy the nature.

A bird in vineyard holding a grape in it’s beak.

The Nepali Wine: Pataleban vineyard winery has been making wine since 2014 in Dhading district. It produces three varieties of wines: Red Kaule (red wine), White Ashish (white wine) and Rose Koshu (red wine). Rose Koshu is sweeter than the Red Kaule. The distinctive taste is prepared by varieties of hybrid  table and wine grapes. Wine is made by fermenting juice which is made by pressing grapes to extract a juice. Only pulp is used to make white wine  while stem, skin and seeds are used to make red wine. After extracting juice, yeast is added in the tank. It’s the yeast that produces the wine’s alcohol. The yeast absorbs the sugar and converts the juice into alcohol. After completing maturation phase in one year, wine is ready to bottle. Thus the journey of grapes from vineyard to glass ends in mouth. The winery occasionally brings consultants form abroad for training. The MRP of all the 3 varieties of wine is fixed at RS 1175 and is exclusively available in selected stores and hotels across the nation.

Grapes and wine benefits: Among the alcohol wine is considered as a ‘healthy’ drink. An antioxidant called polyphenols present in wine is said to rejuvenate old cells, making them look younger. But if you don’t like alcohol, consuming grapes play the role against cancer , supports eye health and improve brain function. Cheers !!!