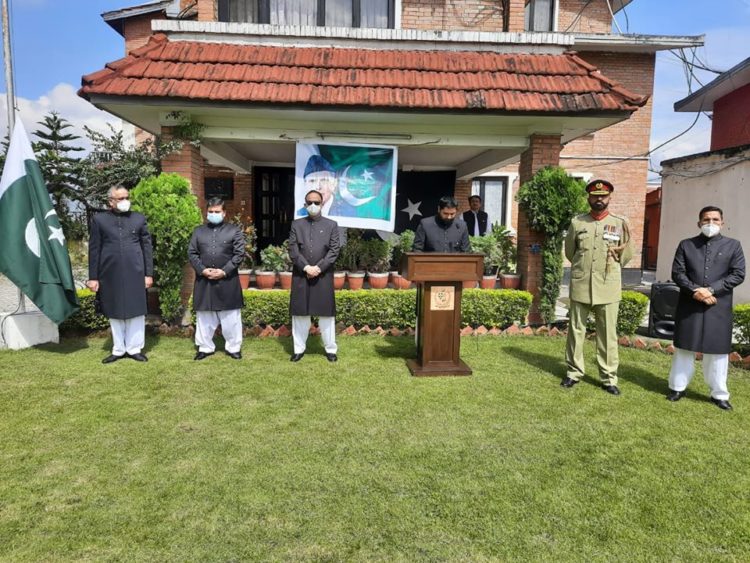 Photo: Facebook page of Embassy of Pakistan in Kathmandu.

Kathmandu, August 14 : On the occasion of the 74th Independence Day of Pakistan, the Embassy of Pakistan in Kathmandu held a flag hoisting ceremony at its premises this morning.

Messages from Pakistani President and Prime Minister were read out after hoisting the flag. In his message the President of Pakistan Arif Alvi reaffirmed the resolve to live up to the ideals of Pakistan’s founding fathers, and paid homage to the heroic struggle of all the workers of Pakistan movement.

Pakistan Prime Minister Imran Khan paid tribute to “all those sons of the soil who laid their lives while defending and protecting the territorial and ideological frontiers of the motherland”.

The Pakistan Prime Minister expressed the confidence that the struggle and resilience of the brave Kashmiris will culminate into their inalienable right to self-determination.

A message of the Foreign Minister of Nepal, Pradeep Kumar Gyawali on the occasion of Pakistan Independence Day was also screened.

The Foreign Minister expressed his felicitations to the people of Pakistan and appreciated the friendly cordial relations between the two countries.

Addressing the ceremony Ambassador Mazhar Javed recalled the history of Pakistan movement under the leadership of Muhammad Ali Jinnah.

Referring to the Jammu Kashmir dispute, the Ambassador said that resolution of this long outstanding dispute in accordance to the wishes of the people and the UN resolutions would complete the agenda of the partition.