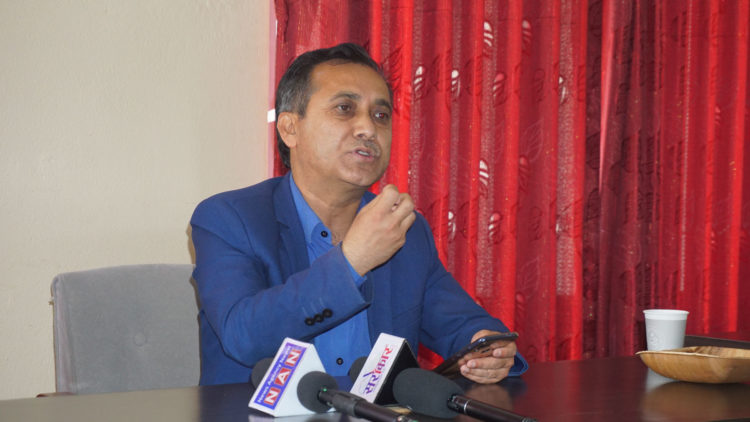 Spoke person of Nepali Congress, Biswa Prakash Sharma putting the view of the party regarding amendment of the constitution.

Kathmandu, May 28: The main opposition party, Nepali Congress has made its position clear about voting in favour of a constitution amendment proposal registered in the federal parliament.

The party organized a press meet today to put forth the view that it will be standing for amending the Constitution to change Nepal’s emblem including the updated map comprising Kalapani, Limpiyadhura and Lipulek.

At the press conference held at the party’s central office in Sanepa, Lalitpur, NC Spokesperson Biswa Prakash Sharma said the party will position itself clearly in favour of the map that the Congress has stressed on restoring Nepal’s right to Kalapani, Lipulek and Limpiyadhura.

“It’s only about securing the party’s right to an institutional decision, which will be taken by the CWC meeting on May 30,” he said.

He also shared NC position since the past about the return of Indian Army from Kalapani.

The party’s proposal to take an institutional decision at the all-party meeting was not seeking more time or to obstruct the process that had begun in the parliament.

The party takes it seriously the statements made by some ministers that the NC said that the proposal should be taken out from the agenda of the parliament.

The issue of nationality cannot be a matter of blame game but should be an issue of unity with a strong national sentiment, he said while welcoming the proposal of the Prime Minister to have the amendment proposal passed unanimously.