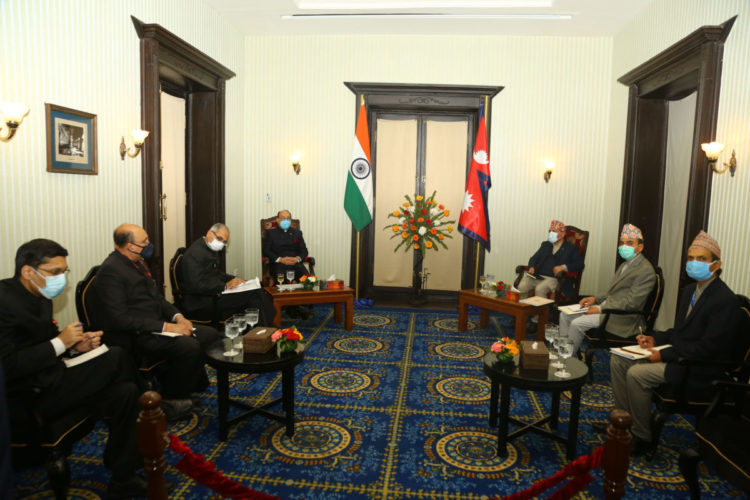 Kathmandu, Nov.26: The Foreign Secretaries of Nepal and India have begun delegation-level meeting in the capital today after a gap of about one year.

All topics related to Nepal-India relations would be discussed in the meeting, the Ministry of Foreign Affairs said.

The Nepali delegation is comprised of Joint Secretary duo Sewa Lamsal and Yagya Bahadur Hamal among the officials while the Indian delegation includes Joint Secretary (North) at the Ministry of External Affairs, Arindam Bagchi, India’s Ambassador to Nepal Vinay Mohan Kwatra and the embassy officials.

Before this, the two Foreign Secretaries held discussions on various topics of bilateral interest and concern. Joint Secretaries Hamal and Bagchi as well as Ambassador Kwatra were present on the occasion.

Secretary Shringla arrived in Kathmandu today on a two-day visit at the invitation of Secretary Paudyal.
The Indian Foreign Secretary was welcomed at the VIP lounge of Tribhuvan International Airport (TIA) by Secretary Paudyal and high officials at the Ministry of Foreign Affairs and Ambassador Kwatra along with the embassy senior officials.

Stating that he would be busy in high-level meetings today, Thursday and tomorrow, Friday, he said he would travel to Gorkha on Friday to inaugurate three school buildings there reconstructed by the Government of India.

The Indian Foreign Secretary informed that 40 thousand houses have been rebuilt in Gorkha as per Prime Minister Narendra Modi’s announcement of reconstructing 50 thousand houses.

He said the Buddhist Monastery constructed in Manang would also be inaugurated on Friday itself. However, he did not mention whether the monastery would be inaugurated virtually or physically.