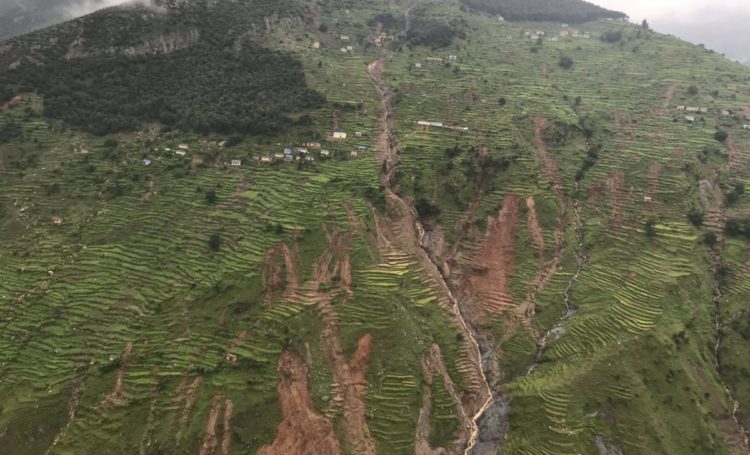 An aerial view of recent landslides in Jajarkot.

Jajarkot, July 14 : More than 500 people who have been displaced from their homes due to the landslide in their settlement are now facing hunger.

This situation has arisen after the food depot of the Food Management and Trade Company run out of stock of rice.

The contractor responsible for transporting food to the depot has failed to do so.

The contractor was responsible for transporting 1,057 quintals rice grain from the district headquarters to Ghat depot for this fiscal year.

Although the Company’s godown at the district headquarters has enough stock of the food grain, there is not a single grain of rice at the Ghat depot.

He said it appears that the chief of the Company is providing protection to the contractor.

“A food depot has been approved at a new place in Barekot but the rice grain has not arrived at the depot,” chief of the District Coordination Committee (DCC), Man Bahadur Rawal, said.

He said the depot has run out of food grain for a month now. The people coming to the depot to buy food grain are returned empty-handed.

“The landslide-displaced people who are living in treacherous condition at the school and in tents on open ground are faced with hunger amidst adverse weather,” lamented Mohan Jung Shahi of Barekot rural municipality-5.

The landslide-displaced people have complained that no body has brought food relief to them except the 2,300 kilogrammes food grain airlifted to the disaster-hit site at the initiation of Minister for Forests and Environment, Shakti Bahadur Basnet.

This food grain lasted for four days since the disaster hit. Now the landslide-displaced are in immediate need of food grain.

The District Disaster Management Committee has held a meeting in the district headquarters Khalanga four days after the occurrence of the disaster to discuss on measures for the supply of food grain to the disaster-hit area.

It is said the landslide-displaced people at Sarkitol in Barekot rural municipality-5 are facing problem of shortage of drinking water and as well as tents to shelter from the frequent rainfall.

“More than 15 people are sharing a single tent due to the lack of tents. Moreover, there is lack of clean drinking water,” complained a local Kali Bahadur Sarki.

The locals are even unable to grind the food grain since the traditional water mills located near the streams have been washed away by flood.

The roads have been disrupted and travel from one village to another is difficult, said Janak Shahi, a resident of Barekot-5.