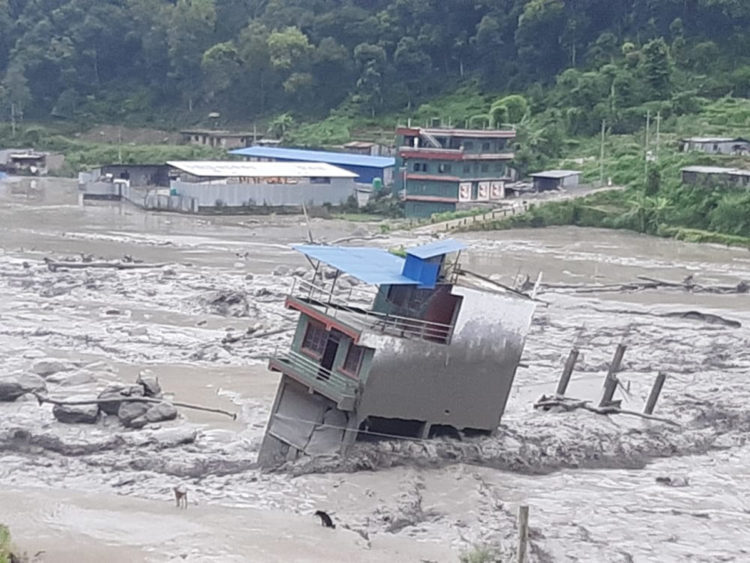 Sindhupalchowk: Seventeen houses and huts in Helambu and Melamchi of Sindhupalchowk were washed away by the flooded Melamchi River last night. According to the District Police Office, the incessant rains for some days triggered the flood.

Of them, nine are cemented residences, DPO’s Superintendent of Police, Rajan Adhikari, said.
Earlier, Melamchi bazaar was devastated by the flood on June 15. Even the structures where the flood caused depositions of mud and other materials were swept away by the last night disaster. The structures were however vacant since the June 15 disaster.

The river has washed away the Rato Bridge at Chanaute. According to local resident Hasta Pandit, the bridge collapsed at 7:45 this morning. The bridge was the only way connecting Melamchi-7 and 8, Panchpokhari 1 and 2 and many wards of Helambu. With the collapse of the bridge, traffic in the area has been closed.

The floods have also washed away a suspension bridge at Gyalthum. According to Rajan Adhikari, Superintendent of Police, District Police Office, Sindhupalchowk, Gyalthum bazaar is also at risk due to rising water level in the river.

The river has changed its regular course and swept away the kitchen of Talamarang Police Beat. Helambu Rural Municipality Chair Nima Gyaljen said no bridges above the Melamchi bazaar were left by the flood.

No vehicle could reach Helambu from Melamchi as the landslides have hit the Helambu Highway at different points, Melamchi Mayor Dambar Aryal said.