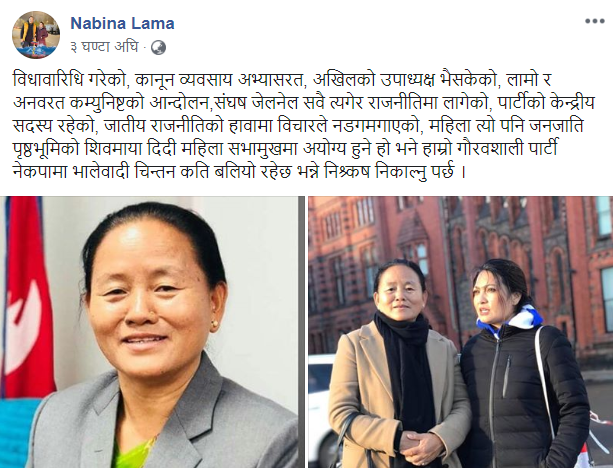 Kathmandu, Jan 12: Nabina  Lama is one of the female parliamentarian from  the ruling NCP (Nepal Communist Part) party who is lobbying for  Shiva Maya Tumbahangphe  in the post of speaker.  While prime minister KP Oli along with Puspa Kamal Dahal have been asking her to quit from the deputy speaker post to make clear ground to make their dear one in the post of speaker, she has occasionally said that she won’t resign from the post.

Whoever is made speaker, the speaker should be made from opposite gender  as per constitutional provisions. Both the person selected by the co-chairperson  for the post of speaker  are male.  In this regard Nabina Lama, the MP from the then UML party (now CPN) has raised her voice in social network defying the patriarchal thought of her party. In her facebook status she has said “Shiva Maya Tumbahangphe- has  doctorate degree, is active in communist movement,   is central member of the party,  is a woman from indigenous front. Even now if she is said as  incapable for the post of the speaker then we should make a conclusion that how strong the macho thought is prevalent in our party.”