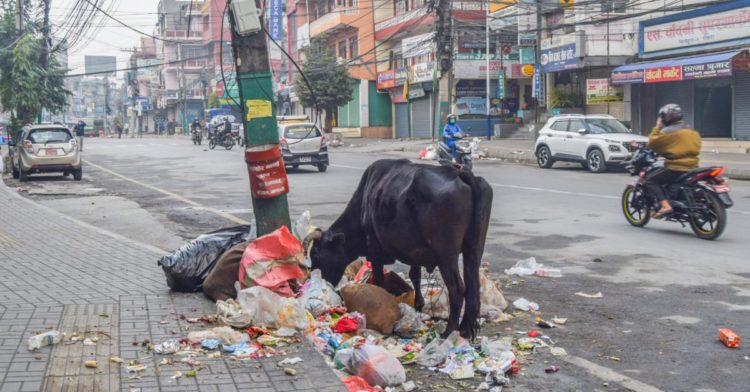 Shree Bhadra Poudel, Pokhara, March 3 : Even though Pokhara Metropolitan City is said to be a smart city, it is becoming dirtier day by day. The problem has increased due to lack of garbage and stray livestock management.

Nowadays, in the morning, animals can be seen searching left over foods on the pile of garbage in main areas of the city.

This problem is more prevalent in the main market areas including Chipledhunga, Mahendrapul, Newroad, Nayabazar, Sabhagriha Chowk and Prithvi Chowk.

Metropolitan Spokesperson Dhan Bahadur Nepali said that there is problem in the management as the locals secretly dump garbage on the road at night. Although it has been asked to manage garbage only in garbage dumps, some have not implemented it.

However, the locals have demanded that the metropolis should provide vehicles from time to time for garbage management.

Kshetra Bahadur Gurung of New Road said that the metropolis  should be strict in  monitoring. “Smart city is just the speaking words of the politician but it has not been implemented in reality”- he added. He stressed on the need to conduct awareness classes by identifying those who litter the streets at night.