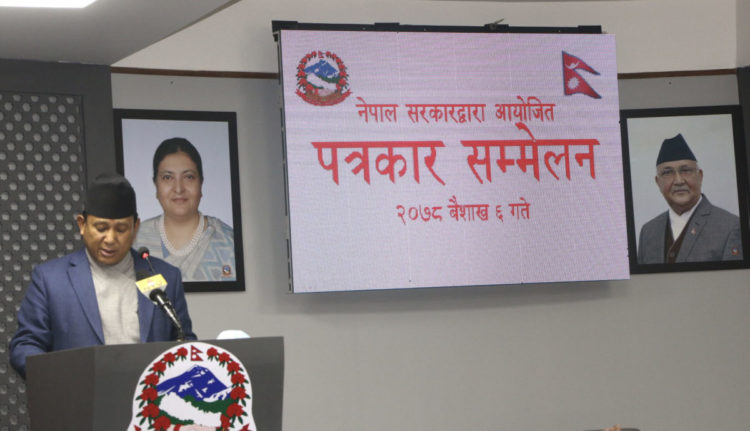 Kathmandu, April 19 : In view of rising cases of COVID-19, the government has issued different new directives for the containment of the infection.

A meeting of the Council of Ministers held Monday issued such directive as per the Clause (2) of the Infectious Disease Control Act, 1964, Government Spokesperson and Minister for Communications and Information Technology Parbat Gurung said.

However, the prescheduled examinations of schools and colleges and all the practical examinations of the medical education shall continue by applying public health protocol.

Furthermore, prior approval from the local administration is expected for conducting social and religious functions in the party palaces.

Likewise, assembly, conferences, seminars and trainings should be conducted virtually and more than 25 persons’ participation is rejected in case such events should be done compulsorily.

Public vehicles are ordered to carry only the limited number of passengers on the basis of the vehicles’ seats, use of face mask and hand sanitizer is made mandatory for passengers, drivers and co-drivers. As per the decision, the public vehicles should be disinfected every day.

Likewise, the hotels and restaurants should operate only from 8:00 am to 8:00 pm by applying health precautions and home delivery service should be given before and after the given time.

On a different note, government spokesperson Gurung said the government ended the parliament session due to increasing threat of Corona Virus and also due to acts of some parties of stopping the parliament from functioning.

The opposition parties also had the opportunity to change the government but they did not, he said in response to query about the parliament being prorogued to avoid a no-confidence motion.