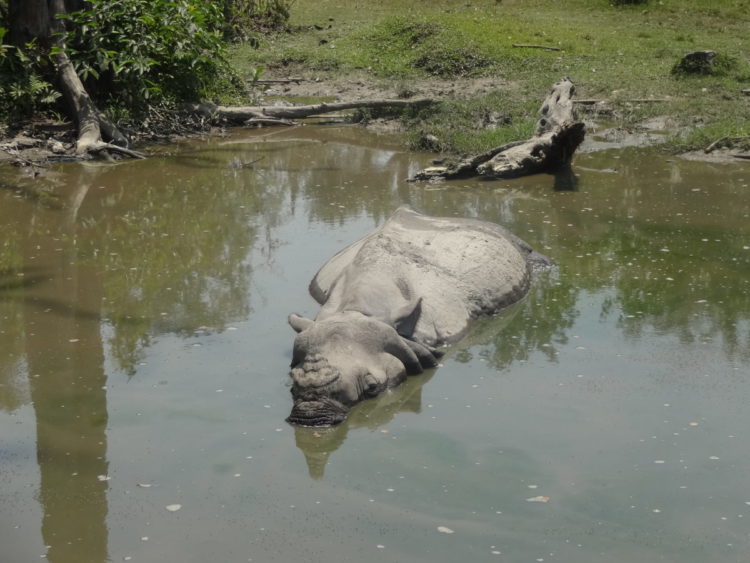 Parasi, August 5: An endangered one-horned rhino which was swept across the Nepali border into India by flooding three years back was rescued.

The rhino was rescued when it came to Bardaghat Susta Paschim Narsahi of Nawalparasi district.

Chief conservation officer of the Chitwan National Park, Narayan Rupakheti shared the rhino was taken back to the national park in the midnight on Tuesday.

The rescued wildlife was released to the area nearby Thapaliya Lake at Kasara in the national park at around1.00 pm, he informed.

He furterh shared the female rhino aged around 12 years was rescued and brought back to home with the help of three elephants and 25 technical staffs.

It may be noted that the flood-fed Rapti River had swept the rhino across the Nepali boundary into Balmiki Tiger Reserve in India three years back.

The rhino often used to come towards Nepal while grazing.

Rupakheti said efforts were made to rescue the rhino when appeared in Nepali territory on last December but turned in vain.

Acting on the information that the rhino has been appeared at Narsahi area since 30 July, the rescue effort was made possible with support of CNP employees, Nepal Army, employees from National Nature Conservation Trust and Division Forest Office Nawalpur.

This is so far the 11th flood-swept rhino rescued from different parts of India and Nepal, informed Assistant Conservation Officer Prakash Uprety.

Nine rhinos were rescued from India and two from Nepal since the flooding in the Rapti River in 2017, Uprety informed.

There are still some rhinos, taken away by flooding into Indian Territory, and correspondence with Indian authorities have been made to create environment to return the stranded rhinos to Nepal, he said.

However, Indian side has yet to respond to the request of Nepali side to that end.