First runner-up of MasterChef returned home for a month

First runner-up of MasterChef returned home for a month 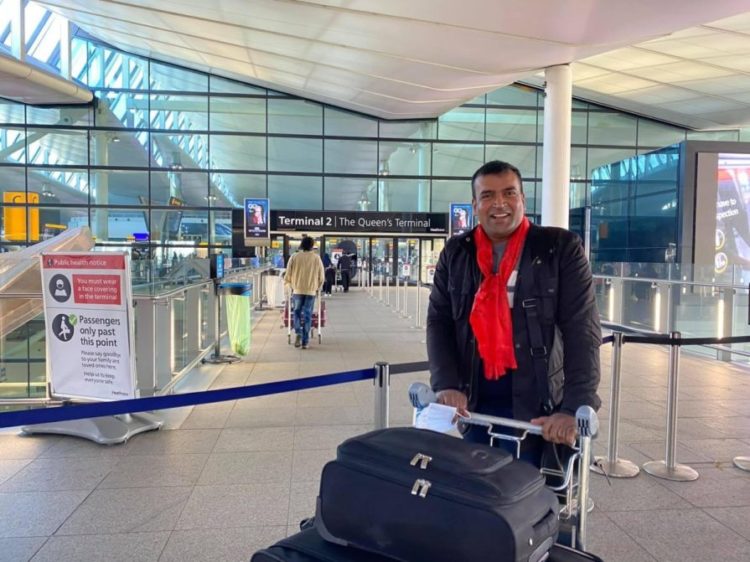 Kathmandu, Feb 25 : Popular chef Santosh Sah has made Nepal proud through his hard work and perseveration. Recently Sah finished first runner-up in the BBC Television competitive cooking show, MasterChef: The Professionals, which has helped Nepal known to the world.

Following this achievement, Sah known as ‘king of cooking’ has garnered popularity not only in Nepal but also across the world. Congratulatory messages were pouring in for him.

Sah has heightened image of Nepal to the world by providing the country’s indigenous dishes to the globe. “There is no difficulty to get success in the world. Just hard work is needed. I have made a plan to promote Nepal’s typical dishes across the world,” shared an elated Sah, who today landed in Nepal following this achievement.

He was talking to media-persons at Tribhuvan International Airport shortly after landing here from the UK.

Operating a restaurant each in the UK and Nepal is his recent plan on the table. “Hard work is a secret of my success. We try to be happy with whatever we have.”

Obviously, he went through a journey of struggle to reach this situation. I did struggle a lot in my life. “I used to sell plastic bags and bread at a point in time. Now I am happy with whatever achievement I have got,” he shared.

He said that he arrived Nepal to learn more from Nepali chefs as he started to prepare Nepali food only from two years ago.

Sah said, “Our food habit is not so hygienic. I want to request all to have warm food and only drink bottle water.” I had never expected that I, an ordinary Nepali, could get such big success. There is no recognition to chef and food in the country.

He started journey of struggle with an objective of doing something in this sector, added Sah.
He opined, “Though I worked in India for 10 years as chef, now I got success as I had thought doing something for the recognition of Nepali food and Nepal.”

“Now, there will be quality in Nepali food and the country can also make income by publicising the indigenous Nepali dishes,” he opined.

Sah is publishing a book ‘Cook Book’ in five languages. He said that he arrived in Nepal for the activities related to the book publication. A world-wide roadmap of food has been prepared and the campaign would be started from London, he said.

“There is no chef culture in Nepal but it is possible,” the king of cooking, Sah hoped. Sah, who arrived in Nepal at the initiative and facilitation of the Pacific Asia Travel association (PATA) Nepal Chapter, will be in the country for about a month.

He will be the key-note speaker in the 44th annual general meeting of PATA. Sah will also participate in the programmes to be organised by other tourism organisations including Nepal tourism Board.