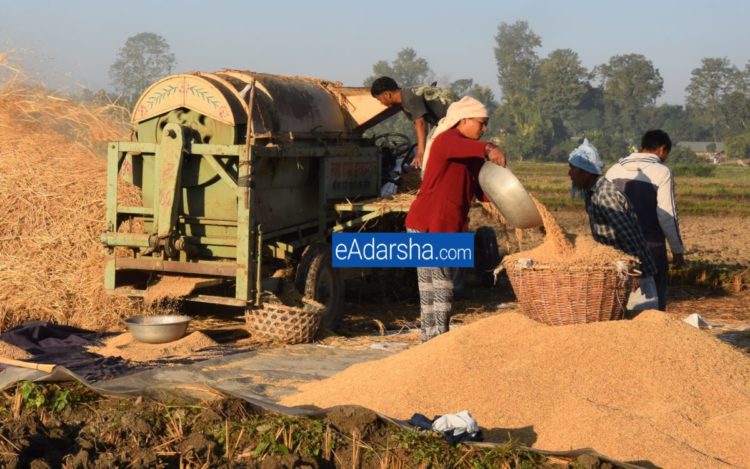 Kathmandu, Oct.29: Farmers are to get relief as the government has set the minimum support value of paddy grains in time this year.

With the government’s decision, the door for resolving other problems facing farmers has opened, said acting secretary of the Ministry of Agriculture and Livestock Development, Yogendra Kumar Karki at a dialogue with the theme of situation of the implementation of the support value of paddy grains and future roadmap organized here on Thursday by the Nepal Agricultural Journalist Association.

“All can purchase paddy grains. But we have started buying it through cooperatives,” he said. The Ministry has devised a long-term plan to resolve problems of farmers relating to fertilizers, seeds, irrigation, the market and decent value for paddy grains, he informed.

The ministry’s spokesperson and joint secretary Dr Hari Bahadur KC said the support value of paddy grains has been set assessing other market and the market at the border with neighbouring country and inflection and providing 20 percent profit of the total production cost of farmers.

Likewise, Vice Chair of the National Farmers’ Federation Panta Kaji Shrestha offered his doubt that farmers would not know about the government scheme and as a result, traders would take advantage of it.

Chairperson of the Nepal Agriculture Co-operative Central Federation Limited, Khem Pathak complained that there is a delay for the government to purchase paddy grains from farmers despite setting the support value in time.

Director General of the Department of Food Technology and Quality Control, Upendra Raya suggested that the concerned authority should maintain quality of paddy grains while purchasing it.