Curfews and clashes as US race protests escalate

Curfews and clashes as US race protests escalate 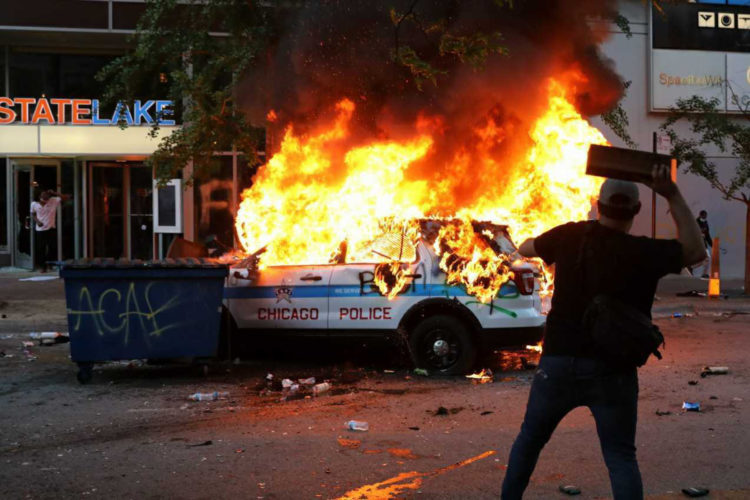 A Chicago police vehicle is set on fire during violent protests Saturday, May 30, 2020, as outrage builds over the killing of George Floyd, a black man who died in Minneapolis on May 25 after a police officer pressed his knee into his neck for several minutes. (Ashlee Rezin Garcia/Chicago Sun-Times via AP)

Minneapolis, May 31: Curfews were imposed in major US cities Saturday as clashes over police brutality escalated across America with demonstrators ignoring warnings from President Donald Trump that his government would stop the violent protests “cold.”

Minneapolis, the epicenter of the unrest, was gripped by a fifth consecutive night of violence with police in riot gear firing tear gas and stun grenades at protesters venting fury at the death of a black man during an arrest in the city on Monday.

Demonstrators block the street as a Los Angeles Fire Department ambulance tries to get through during a protest over the death of George Floyd. Photo:AP

From Seattle to New York, tens of thousands of protesters took to the streets demanding tougher murder charges and more arrests over the death of George Floyd who stopped breathing after Minneapolis police officer Derek Chauvin knelt on his neck for nearly nine minutes.

In Los Angeles, officers fired rubber bullets and swung batons during a testy standoff with demonstrators who set fire to a police car.

Police and protesters clashed in numerous cities including Chicago and New York, with officers responding to projectiles with pepper spray while shop windows were smashed in Philadelphia.

Trump blamed the extreme left for the violence, including widespread looting and arson in Minneapolis, saying rioters were dishonoring the memory of Floyd.

“We cannot and must not allow a small group of criminals and vandals to wreck our cities and lay waste to our communities,” the president said.