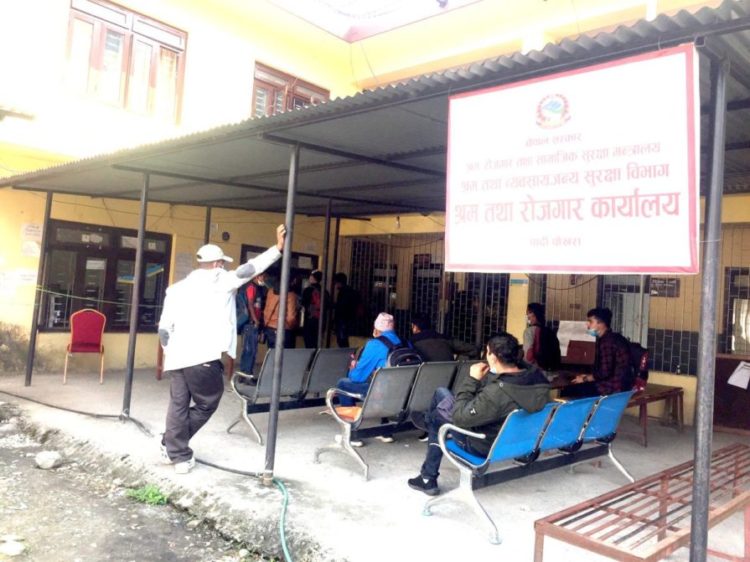 Dhan Bdr. Gurung, Pokhara, March 4 : Anil Karki from Baglung Upallachaur was muttering at Labour Office saying that the  system in government office is  to stand on long queue. He came from Baglung in the morning but entered the Luabor office in Pokhara at 1 o’clock.

Everyone who comes to Pokhara to get permission to go abroad again has the same problem. But they are not aware that re-employment permission can be obtained via online. Resham Manandhar, who came to Pokhara from Syangja for the same job, says that he came to Pokhara on a friend’s motorcycle as he was unsure whether it could be done successfully via online. “I knew it would happen online, but was not sure ” he said.

The Department of Labor and Foreign Employment has started online labor approval service again from January for the convenience of service recipients. Chief of the Labor and Employment Office, Pokhara, Ishwori Dutta Paneru said that some of them used to come to the office without knowing how to operate it. He said the Labor Office had launched an online service to reduce its physical presence and provide paperless services.

“Some people don’t know, and those who do know suspects on the online system,” he said. “Even when the service recipients lack confidence, they are suffering.”

According to Paneru, if the service recipients understand about online re-approval of labor, it will save time, money and also avoid financial manipulation. He said that one should not come to Nepal only for this as labor can be re-approved online even while living abroad.

He said that if this work is done online, there will be no crowd of service seekers in the office and manpower can be deployed elsewhere.

He said that for this, valid visa, old labor permit, passport insurance, a copy of revenue and bank account are required.