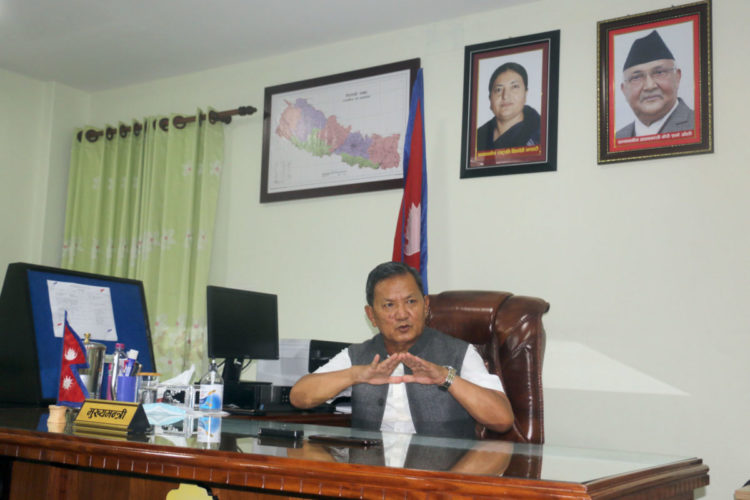 Pokhara, Oct.17: Chief Minister of Gandaki State Prithvi Subba Gurung has said that the business could only sustain when the businessmen were able to survive in such pandemic hours.

While inaugurating the 26th AGM of Restaurant and Bar Association of Pokhara here today, CM Gurung argued that the tourism sector was hit the hardest by the pandemic and so extra caution should be adopted while running business.

He shared that Rs 27 billion was lost daily due to pandemic in the tourism sectors and concerned side is facing hardship to sustain the business.

Gurung further added that he was effortful to address the problems raised by the sector. He opined to materialize the zoological park and the ‘Mini Mustang’ concept.

Similarly, State assembly member Rajiv Pahari argued that the government should address the concern of small scale businessmen as the pandemic has affected all not only the large scale businessmen. He shared that the border demarcation of the Phewa Lake was on progress as it was derailed for long.

Speaking in the same programme, Pokhara Tourism Council chair Chiranjivi Pokharel opined that the State government should talk to federal government regarding addressing the concerns of tourism entrepreneurs.

The association chair Araniko Rajbhandari complained that government has committed mistake by not including restaurant sector in tourism industry.

He said that the restaurant sector has Rs 10 billion investment and provided employment to 100,000 people but unfortunately about 70,000 workers have lost their job due to the pandemic.

The AGM concludes after electing new working committee. The Association has 80 members in Pokhara.