Climate change, Migration of Locust and Agricultural damage in India: Alert for Nepal

Climate change, Migration of Locust and Agricultural damage in India: Alert for Nepal 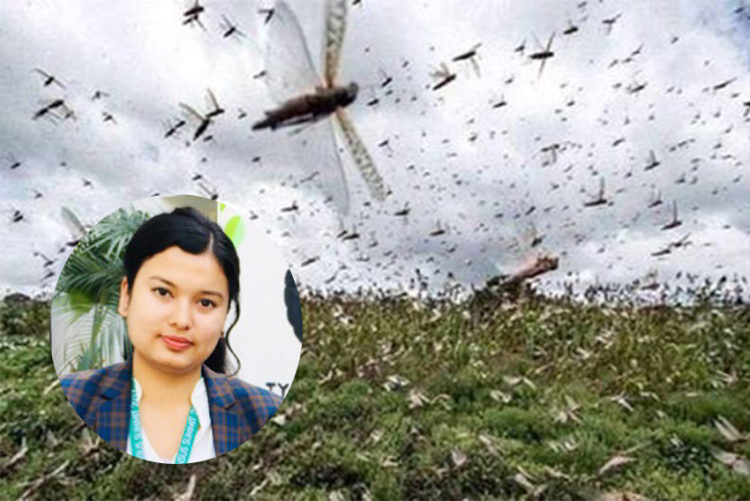 On May 26, 2020 desert locusts have entered various places in India. A part of the grasshopper family, locusts is highly mobile insects that cause extreme damage to crops which migrate across different countries.

In the last two decades the pest which frequently migrates has attack Rajasthan also a   significant one last year. This time swarms have not only attacked Rajasthan but it have flied to various other parts of Madhya Pradesh, Uttar Pradesh and now at Maharashtra, which was attacked in 1993, where it has not seen by people of Maharashtra since 1974 and it have returned with squads now.

The desert locusts prefer to breed in moist sand and green vegetation mainly in waterless area. Due to change in climate there was witnessed heavy rainfall in 2019 in the dessert region of Africa and Arabian Peninsula which is the reason they then migrated to India via Iran and Pakistan. The changes in climate temperature leads the swarms of locusts to travel around in search of food and favorable hot temperature which is increasing as summer starts in South Asian region. The travels of locust to India have mainly damaged the crops and it’s the threat to Nepal on coming days as locusts are traveling in search of food. As, covid-19 is climbing peak in increased cases in Nepal which has already impacted huge loss for agricultural sector and now the entrance of locust will worsen the situation more, mainly by the loss of crops which locusts consumes.

According United Nations, Food and Agricultural Organization (FAO) it informs that in one day they can eat the food which 35,000 people can consume by the spread of swarm of locusts across an area of one square kilometer. As of the nature of the pest they have good appetite as one locust can eat food equal to its own weight. On daily basis it consumes about two grams. So, it’s dangerous for agriculture sector which can cause damage rapidly in small time period, as there consist of 40 million locusts in a square kilometer swarm.

In Nepal, where farmers are already bearing the force of covid19 induced lockdown and the decrease in prices of agricultural products, the real damage will be caused to those rural Nepalese farmers. This brings worrying situation to Nepalese farmers as they have already heard of massive crop damage that locust swarms able of which flies 250 km to 300 km in one day as this shows the possibility of entering Nepal.

Estimations say more than 3.5 lakhs hectares crops were affected in various areas of Gujrat and Rajasthan. In India, this attack of locusts is supposed to be one of the worst as looking into the damage caused by swarms as it have affected lakhs of farmer’s crops of mustard, cumin and wheat have divested.

From the report in Times of India, locust swarms have reached as far as Vidarbha in Maharashtra and caused crop damage also, in neighboring Pakistan, the authorities declared a nationwide emergency in February. Referring to this, government to Nepal should pull the attention of ministry of agriculture of study this plague in details, as they have to make awareness and help Nepalese farmers as soon as possible to take preventive steps accordingly, to save the huge loss of crops of Nepal.