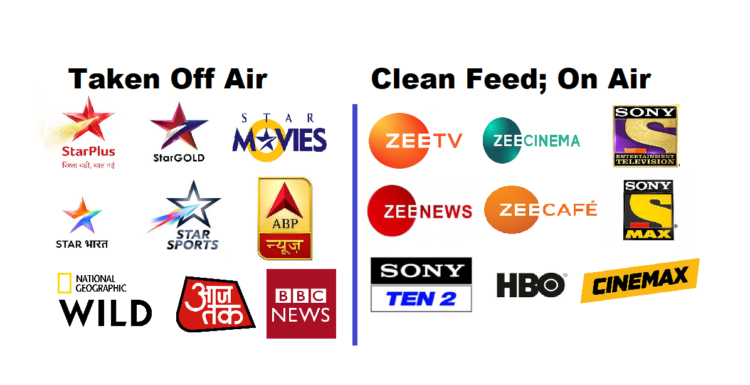 Pokhara, Oct.24: Many foreign tv channels have been taken off air by digital cable tv, IPTV, terrestrial DVBT-2 and DTH as per government order after they denied or failed to implement clean feed policy within the deadline of yesterday’s midnight.

Zee channels and Sony network have implemented clean feed policy in Nepal so their channels are on air. But channels from Star India network are taken off air.

Some popular tv channels from the network , which have been taken off air are: Star Plus, Star Bharat, National Geographic, Nat Geo Wild, Star Gold, Star Gold and Select Star Movies.

Meanwhile some channels which were already advertisement free can be watched in all tv service providers. Channels such as HBO, HBO family, HBO signature, Cinemax never carried the advertisements.

Sports lover now are unable to watch IPL cricket as  all Star Sports channels have been taken off air.

Meanwhile an Indian channel broadcasting from India known as Nepal 1 tv is still seen on air. The service provider are taking it as Nepali channels because of its name.

As per the Act on Regulation of Advertisements-2076 BS, from October 23 foreign advertisements cannot be aired in television broadcasts done within Nepal, which is the clean feed policy.

Logo of Nepali tea registered in India and USA

Pashupatinath temple to open from December 16