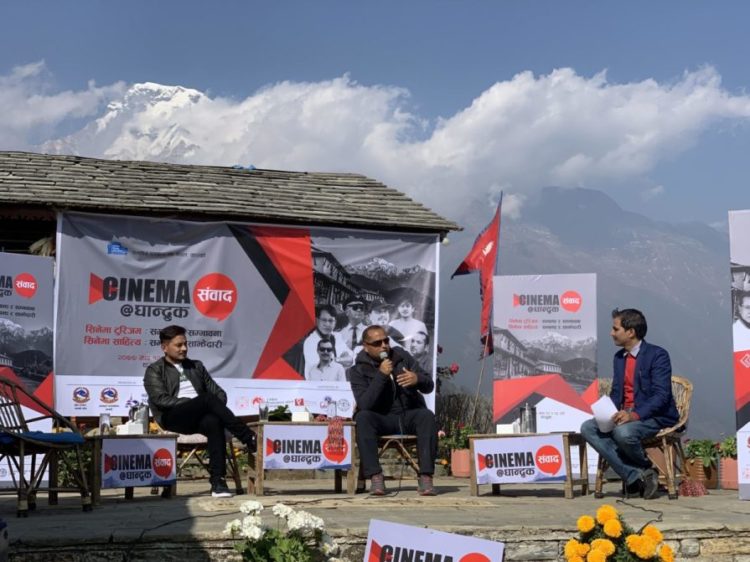 Pokhara, Jan 26:  The rural areas of the country have the potential to be developed as natural studios. For the shooting of national and international movies, especially Pokhara and the surrounding areas are framed.

The movie covers the scene of the area and has helped in the promotion of tourism there. Similarly, Ghandruk village in Annapurna Rural Municipality  of Kaski is also a potential place for filming.

A discussion on ‘Cinema Tourism: Relationships and Possibilities’ was conducted in the ‘Cinema Dialogue @ Ghandruk’ program organized by the Kaski branch of the Nepal Film Journalists Association in the beautiful Ghandruk village on Tuesday.

Nepali film director/actor Sudarshan Thapa, Pokhara Tourism Council president Gopi Bhattarai and journalist Vasu Mishra facilitated the discussion. At the beginning of the discussion, the facilitator Mishra said that the Nepalese people have not recognize the Nepali geography and did not help in the promotion of tourism.

After cinema, the most affected areas are both cinema and tourism.  “As Corona is becoming more and more stable, it is gradually returning to normalcy,” said Gopi Bhattarai, chairman of the Pokhara Tourism Council.

Director Sudarshan Thapa said that COVID-19 has affected the entire sector, adding that both cinema and tourism have been severely affected. “Tourism and cinema are very closely linked,” he said. Recalling the memories he said – “I also came to Ghandruk 12 years ago during the shooting of movie ‘Mero Euta Saathi Cha’. A lot has changed since then and now- he added.

The discussion of Tanahu’s Manahunkot has started at this time. A 15-second video posted on the popular Tiktok app made the hill popular. Similarly, cinema has developed a place as a tourist hub. When the facilitator Mishra mentioned the reference to Manahunkot, the chairman of the tourism council Bhattarai also agreed with him

He said, ‘Many places in the world have become tourist hubs through cinema. The periphery of Pokhara is being exposed through cinema. Now it seems that the tourism institutions have collapsed. We need coordination in that. ”

Director Thapa said, “We shot the film ‘K Yo Maya Ho’  in Mustang but it didn’t discuss its geography. Later on we shot ‘Prem Geet’ and we got a good response from the locals when we showed the area from Ghansa to Mustang in the movie.”   If we can show how to show the place, the costumes, the culture, the audience will get to see it with interest, he added.

‘Is the support of tourism related organizations not enough for the cinema sector ?’ Gopi, chairman of the tourism council, replied to the question saying, “We love cinema sector but there is no coordination. We will continue to do better in the days to come than we have in the past.”

The second session will be on ‘Cinema Literature: Relationships and Partnerships’. Poet Bhushita Vashishta, writer Ganesh Poudel and actor Deepak Raj Giri will be the speakers in the discussion. The facilitator of the session will be Dinesh DC.