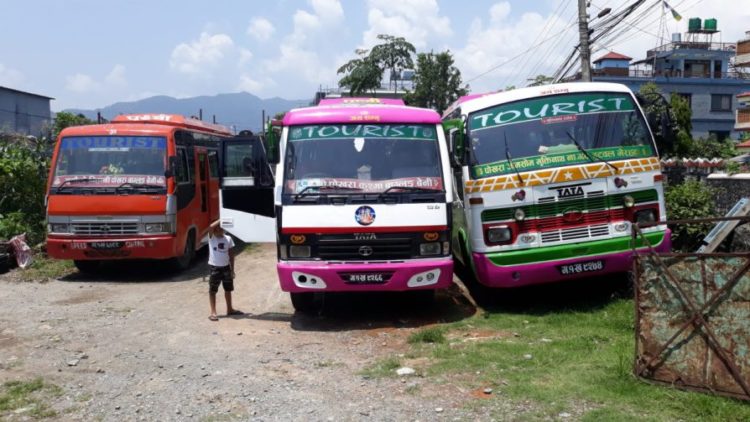 Bijay Nepal, Pokhara: Chandra Bahadur Bhandari (34)  been  transport businessman since 17 years. Three vehicles in his name are affiliated with Prithvi Highway Bus Operating Company Pvt. He has to pay Rs 1,70,000 monthly installments of 3 vehicles. But due to the corona epidemic, all vehicles have been stopped for about two months due to the lockdown issued by the government.

Two of his buses used to operate in Pokhara-Jomsom route and another within the Pokhara Valley. Stating that the vehicle is now covered with luffa gourd, he complained that if the lockdown continues, they will be hit harder. Bhandari said that the transport sector has been severely affected since the beginning of the Corona epidemic in Nepal 15 months ago.

Similarly, Toynath Gautam (40) of Annapurna Tol, Pokhara-7 is also a transport businessman. He owns four vehicles. The vehicles, which run under the Prithvi Highway Bus Operating Company, operates in route of Pokhara to Kakadvitta, Jomsom, Darbang and Baglung. “I don’t sleep all day and night. I’m unable to pay bank interest and engines are rusted.”-he cried.

For the past 45 days, the country is under lockdown. In Kaski, the District Administration Office has started a prohibitory order from April 28 and t has been extended until July 4. According to the order, no private or public transport vehicles are allowed to operate except the essential ones.

The Prithvi Highway Bus Operating Company, one of the largest in Nepal, currently has about 1,400 vehicles. Not only of Prithvi, the condition of all bus owners across the country is similar to that of Bhandari and Gautam.