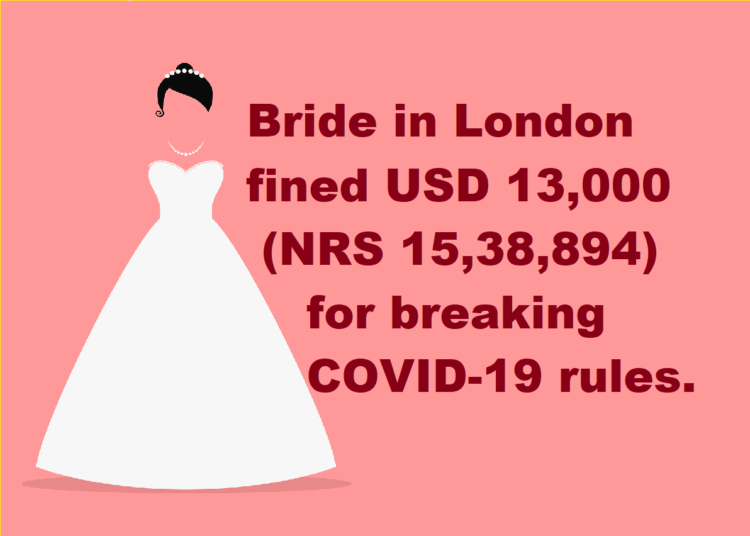 London, Oct.26:  A new bride got an unwelcome wedding present when British police raided her party in south London and sent more than 200 guests home for breaching COVID-19 regulations, the London-based Evening Standard newspaper has reported.

The woman was left facing a possible fine of 10,000 pounds (about 13,000 U.S. dollars) when officers dispersed the crowd after they were called to the venue on the Old Kent Road, south London, said the newspaper in a report on Saturday.

Scotland Yard, metonym for the headquarters of the Met Police, said they responded after residents reported a possible break in at the building. They found revellers packed in with the shutters down in an attempt to avoid being seen.

The bride and one other person were reported for consideration of a fixed penalty notice under coronavirus legislation.

Detective Superintendent Nicky Arrowsmith was quoted by the newspaper as saying: “This event was a blatant breach of the regulations and could have been a breeding ground for transmitting the virus.”
“There were over 200 people inside, no social distancing and indeed no attempts to make the venue COVID secure, in line with the government guidelines,” he said.

“Being reported for a fine is clearly not a wedding present people would be expecting, however as this was such a flagrant breach of the regulations, it was entirely necessary,” he said.

Arrowsmith’s statement came as London police threatened to shut down a number of illegal raves planned in London on Saturday.

In a statement, the police force warned that unlicensed music events “remain illegal” and that officers will “take action” against organisers.

Anyone organizing an illegal rave, unlicensed music event or any other type of gathering of more than 30 people can be fined up to 10,000 pounds (about 13,000 dollars) under coronavirus legislation.

Earlier this month officers broke up an illegal party with 150 people at a derelict pub in the Docklands.
Meanwhile, Scotland Yard also urged anyone attending protests and events in the British capital to “stick to the rules”.

London is currently placed in the British government’s Tier Two restrictions for coronavirus, which means households must not mix indoors in any setting, including in pubs and restaurants. The rule of six still applies outdoors.