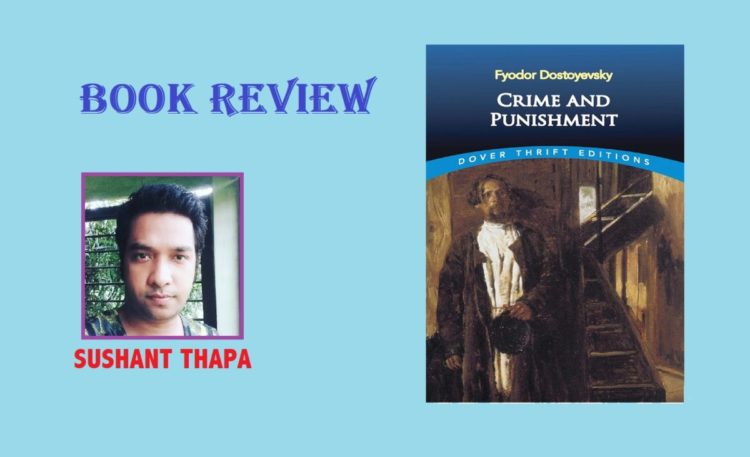 Sushant Thapa: Having only read the book once, this review is going to be my analysis from the memory. Raskolnikov, a former university student, is the main character of the novel Crime and Punishment written by Fyodor Dostoyevsky. Raskolnikov commits murder in the beginning of the novel and for it he gets sentenced to prison in Siberia, Russia toward the ending of the novel.

Dostoyevsky draws a picture of poverty and insanity in this novel. Raskolnikov murders an old woman who is a pawnbroker and also another lady. According to Raskolnikov the woman is useless and he has not murdered a woman, but has murdered a useless thing. Drunken men and tavern posit a gruesome picture of vice in the novel. Poverty is not treated as vice, but beggary is. Raskolnikov seems to be mentally ill, he dresses badly and does not do much. He sits or lies down on a sofa in his room, most of the time. His room is like a cupboard and not well-managed.

Raskolnikov travels to his friend Razumihin (In some references online Razumihin is also spelled as Razumikhin). Raskolnikov writes an article in a periodical about crime and there is mention in the novel about publishing or translating some works which Razumihin brings up; he asks Raskolnikov to work on it, but Raskolnikov does not seem interested. In the article published by Raskolnikov he mentions that some men are extraordinary and are above the law; they can commit a crime. I personally do not agree with Dostoyevsky here.

The book is very simple in language although it offers a wide range of vocabularies. Anyone will be glued to this story of crime and confession.

Marmeladov, one of the characters of the novel, is the alcoholic man who marries a widow with children. He meets Raskolnikov in a tavern. Raskolnikov’s character cannot be predicted. He seems to be mentally ill and erratic. Raskolnikov gives money which he had received from his mother and sister to Marmeladov’s wife after Marmeladov’s death. Raskolnikov seems to be philanthropic, but we have to look at this generosity of his psychologically because Raskolniov himself does not have any richness and he himself seems to need the money—according to his unhealthy situation.

Dostoyevsky mentions a line which can be thoughtful. “Reason is the slave of passion” is the line. In this novel Raskolnikov also confesses his crime to a police officer, but the police officer does not seem to believe in it. There is a prolonged narration which builds up to this event in the novel. Raskolnikov also confesses to a girl in the novel—Sonia, who is the daughter of Marmeladov.

The book is very simple in language although it offers a wide range of vocabularies. Anyone will be glued to this story of crime and confession. Parents, children relationship and poverty can also be the theme of the novel. In the beginning one might think that Dostoyevsky is justifying crime. However, as the novel progresses one will be aware that it is not the case—there seems to be some philosophical musings in the novel which makes us aware about this.

How friendship helps to cure the solitude can be seen in the novel. Raskolnikov is alone and his willingness to venture and reach out for his only friend Razumihin from the university is comforting. Nastasya, the maid, also takes good care of Raskolnikov. The story of the murder moves like a movie. When Raskolnikov goes back to the place of the murder he sees there are painters white washing the same room. I remember the movie American Psycho from this incident in the novel. This sudden build up in the novel is thrilling.

We can clearly see in the novel that Raskolnikov is deprived of love and he is alone—although, he is generous. Maybe he commits the generosity because he is all alone and has nothing more to give.
This novel does not teach us to commit wrong deeds, but makes us aware that there is no option other than confessing, if one commits a crime. The inner voice will not let one escape and rest in peace. If there is crime; there is punishment—whether it is your own inner voice asking for confession or your own psyche. We can see in the novel that it is basically Raskolnikov’s own confession which sends him to the prison.

Reviewer Sushant is an M.A. in English. He is the author of the poetry collection “The Poetic Burden and Other Poems.” He lives in Biratnagar, Nepal.