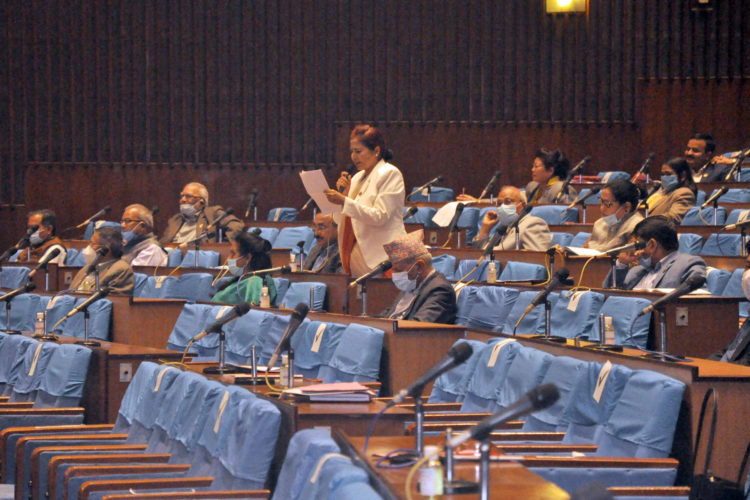 Kathmandu, June 6: Nepali Congress lawmaker Dila Sangroula has called for promoting freedom of the press and making it professional.

Taking part in the deliberations on the issues concerning the Ministry of Communications and Information Technology under the Appropriation Bill-2077 BS in the House of Representatives (HoR) today, the lawmaker questioned over the provision of providing public welfare advertisements to online media as well.

“Are the advertisements for those online media which praise the government or are they for doing real journalism?” she asked.

It may be noted that the number of listed online media has already surpassed 2,000 in the country, but they are not included in the classifications of Nepal Press Council.

The government in the budget for the upcoming fiscal year announced to recognise them as beneficiaries of public welfare advertisements.

Sangruala utilised the platform to accuse the incumbent government of muzzling the press freedom since the beginning. As she said, issues of digital freedom and internet literacy were missed in the budget.

Similarly, Rastriya Janamorcha’s Durga Poudel said budget was not allocated for controlling cyber crime while Prem Suwal of Nepal Worker and Peasants’ Party said the state-owned Gorkhapatra daily had appeared as a mouthpiece of Rana regime and failed to cover national issues and news on national heritages.

Nepali Congress lawmaker Bahadur Singh Lama argued why purchase of controversial security press was needed arguing that the allocated budget could be transferred to Ministry of Health and Population in this critical situation.

Lama was seconded by another NC lawmaker Divya Mani Rajbhandari.

Similarly, NC lawmaker Dilendra Badu complained that the Byas region of Darchula district is still beyond of mobile network.

The deliberations were made under the different topics on Labour, Forest, Culture, Industry, and Agriculture Ministries today itself. The concerned Ministers will respond to the queries after lawmakers’ questions.

10 died and 2 missing in Tanahu landslides