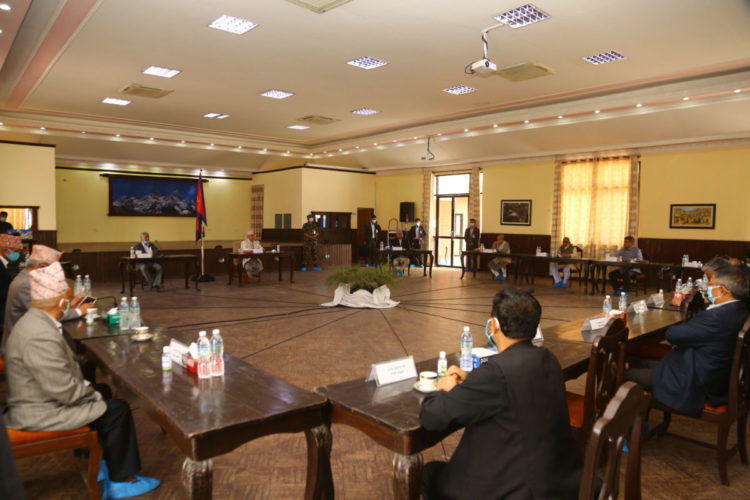 Kathmandu, April 17 : The all-party meeting convened by Prime Minister KP Sharma Oli today discussed the prevention of covid-19 infection, by-elections in vacant constituencies at all three levels and the functioning of parliament.

Spokesperson of the CPN (UML) and Minister for Foreign Affairs Pradip Gyawali informed that the party has committed to stay with the government on national issues.

Talking to reporters after the meeting, he said, “During the meeting, we have seriously discussed about the measures to be taken for the response and prevention of the Corona epidemic, how to hold by-elections at vacant seats in the House of Representatives, state assemblies and localities.”

Stating that all the parties have the same opinion against the Corona epidemic due to open borders and various other reasons, he said that the party leaders have suggested the government to work more effectively in the face of increasing challenges in the country.

He urged the government to take steps to control the crowds by closing schools in hotspot areas and appealing to the people in crowded areas.

Stating that business including MCC has been halted by Speaker Agni Prasad Sapkota, PM said that all the parties have come to a common view that it is not possible to stop it for a long time by using the discretionary power. He said some parties had criticized the MCC and expressed concern that the business could not be stopped.