All Nepalese will get COVID-19 vaccine within 3 months : PM Oli

All Nepalese will get COVID-19 vaccine within 3 months : PM Oli 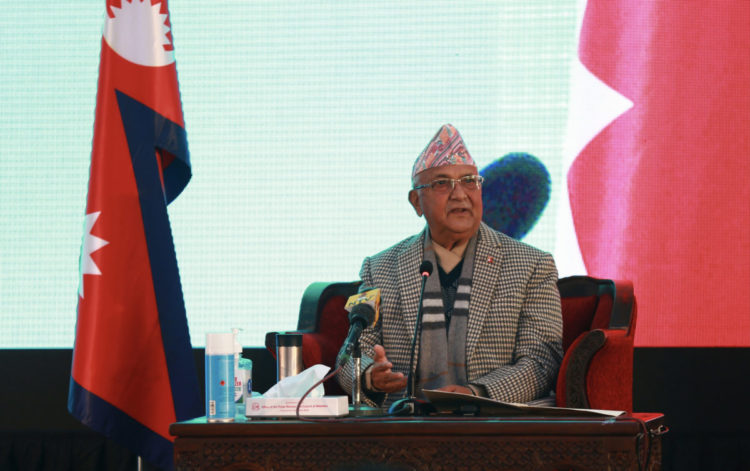 Kathmandu, Jan 27: A vaccination campaign against COVID-19 has begun across the country from today under the slogan ‘Health, Prosperity and Safety: COVID-19 Vaccine Protects’.

Prime Minister KP Sharma Oli inaugurated the campaign at the official residence of the Prime Minister at Baluwatar. On the occasion, Prime Minister Oli said that all Nepalis would be vaccinated free of cost within three months even by purchasing the vaccines.

He said, “No one should be deprived of vaccination. It will be administered free of cost on the basis of sensitivity even after buying it. “Necessary budget has already been managed for the same.”

With the inauguration of the vaccination campaign, listed people are being vaccinated at the same time from 62 hospitals of seven provinces, 17 hospitals of Kathmandu Valley and more than 120 vaccination centres.

Similarly, vaccine would be provided through 300 vaccination centre of 77 districts. All these hospitals were connected at vaccination programme inaugurated by PM Oli through virtual medium.
In the beginning of the programme, a message sent by President Bidya Devi Bhandari regarding vaccination campaign was read out.

On the occasion, Prime Minister Oli added that the President’s message would be implemented taking it as the guideline. He thanked all those actively contributing to the campaign against COVID-19 in Nepal.

The Prime Minister expressed commitment to providing vaccine to all Nepalis at the earliest to save their life.

Informing that coordination was being established with other countries and international organisations to bring in enough vaccines, he said talks with India were underway to take in additional doses of the vaccine.

It was great achievement that over 25,000 COVID-19 suspected people have had tests for the infection from 82 places across the country, the PM urged people to take precautions against the virus.

Saying that the virus has made the society aware of making use of naturopathy and medicinal herbs to fight against diseases, PM Oli said, “It has also taught a lesson how to carry out reconstruction works when country’s economy has been affected.”

The government was serious about saving lives of the people in times of crisis, he said.
Wishing the recovery of health to all those fighting the disease, he extended condolences to the families of those who passed away due to the same.

He made it clear that unlike in the past when there was more fear than precaution with family members and friends also becoming the COVID-19 transmitters, the situation has changed now, the Nepalis are more alert and the situation was not that terrifying.

Prime Minister Oli also suggested not to only relying on vaccination. On the occasion, Minister for Health and Population Hridayesh Tripathi shared that 12 thousand Nepalis were getting vaccinated against COVID-19 today. Stating that the first phase of the campaign would be continued for 10 days, he said the second dose of the vaccine would be administered after 28 days.

Preparations have been made for administering vaccines through 300 vaccination centres in the 77 districts within January 31. One million doses of vaccines were brought to Nepal from India on January 21. The Indian government had provided the vaccines under the grant assistance.

The government is making preparation to bring vaccines for the next phase of vaccination before the conclusion of the first-phase vaccination.  The Covishield vaccine has been developed jointly by the Oxford University and the AstraZeneca pharmaceutical company. The vaccines have been manufactured by the Serum Institute of India.

The District COVID-19 Vaccination Coordination Committee will monitor the vaccination in the respective districts.