After criticism, minister went to monitor the market in Lakecity

After criticism, minister went to monitor the market in Lakecity 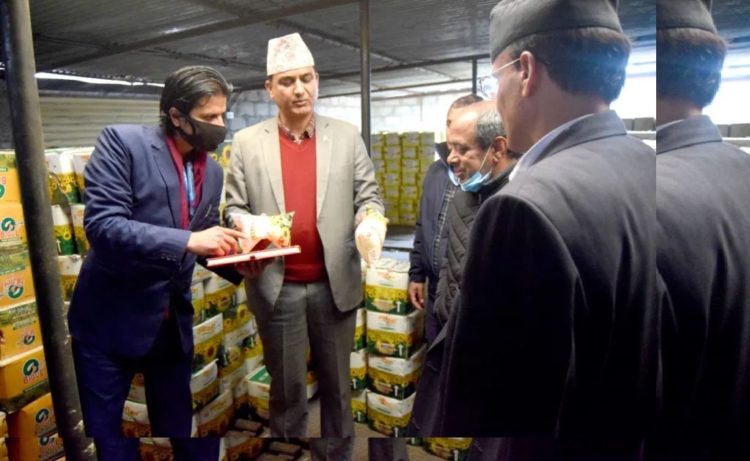 While opposition party presented the data saying prices have gone up by 125 percent in lockdown days, the Industry  Minister, Bikash Lamsal denied saying that the opposition MPs had made false allegations on government,

But the market situation is not as he said. Market prices have skyrocketed and consumers are already hit hard.

Criticism of the minister risen sharply after he lied in Parliament based on year-old statistics. Minister Lamsal went out to monitor the market on Sunday to quell the criticism. He went to the shops selling cooking oil, eggs and construction materials to note the market price.

A team including Minister Lamsal reached the sales center of KL Dugar Group and Narayani Oil Refinery Industries in Pokhara and gathered information.

Director of the Directorate of Industry, Commerce and Consumer Protection, Narayan Acharya said that the monitoring was carried out at Adarsh ​​Stores Malepatan and Namaste Hardware Zero Kilometer.

Minister Lamsal said that he started monitoring the price hike after the issue was raised in the meeting of the state assembly and in the media.  There were many complaints that the people were suffering from high prices, so I went out to monitor it myself,” he said.

He claimed that the market was not skyrocketing as reported by MPs in province assembly. “Regular market monitoring is being carried out. There were complaints that traders had increased prices under the pretext of covid, but no such monitoring was carried out,” he said.

Chairman of the Consumers’ Forum Gandaki, Kapil Nath Koirala said that the prices of edible oil, eggs and construction materials have gone up. According to him, during the monitoring, the businessmen have been instructed not to set their own prices, to post the price list in public on a daily basis, and to keep the weighing materials accurate.

Narayan Acharya, coordinator of the state market monitoring team of the Directorate of Industry, Commerce and Consumer Protection, Tilak KC, head of the Quality and Measurement Office, Gandaki-Dhaulagiri, and Shivaji Baral, head of the Food Technology and Quality Control Division, Pokhara were also present on the occasion.