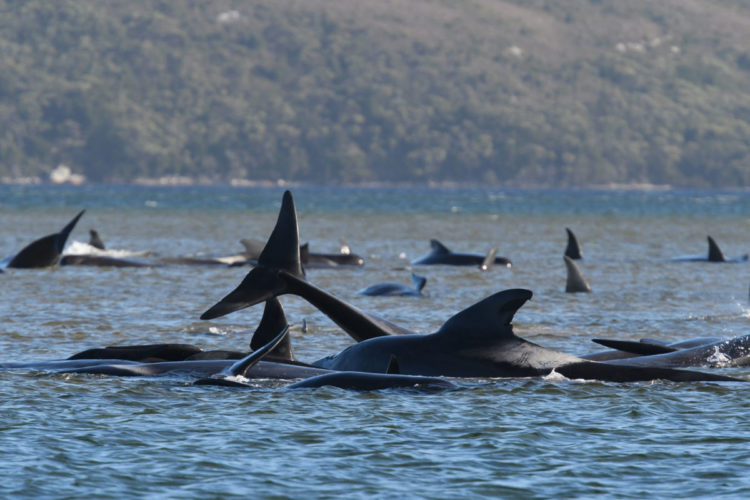 Photo: (The Advocate/Handout via Xinhua)

Sydney, Sept.24: Authorities have rescued 88 pilot whales and are attempting to free 20 others that survived Australia’s worst mass stranding, as crews prepare to remove 380 decomposing carcasses from the shallows of Tasmania state, officials said Thursday.

Crews found the 20 whales that are still alive on the fourth day of the rescue operation, Tasmania Parks and Wildlife Service Manager Nic Deka said. “Whenever we’ve got live animals that have a chance and we have the resources, then we’ll certainly give in a go,” Deka said.

Almost 500 whales were discovered on Monday and Wednesday beached on the shore and sand bars along the remote west coast of the island state near the town of Strahan. The task of removing hundreds of tons of whale carcasses begins Friday and is likely to take days, Marine Conservation Program wildlife biologist Kris Carlyon said.

Methods under consideration include towing the carcasses or loading them on barges to take them out to sea to be dumped somewhere where they will not drift ashore or create navigational hazards. Carlyon said rescue crews were working 12-hour days.

“Everyone’s tired, feeling the fatigue, long days,” Carlyon said. “The emotional toll can be significant.”
Why the whales ran aground is a mystery. Theories include that the pod followed sick whales or made a navigational error.

Tasmania is the only part of Australia prone to mass strandings, although they occasionally occur on the Australian mainland.

Australia’s largest mass stranding had previously been 320 pilot whales near the Western Australia state town of Dunsborough in 1996.