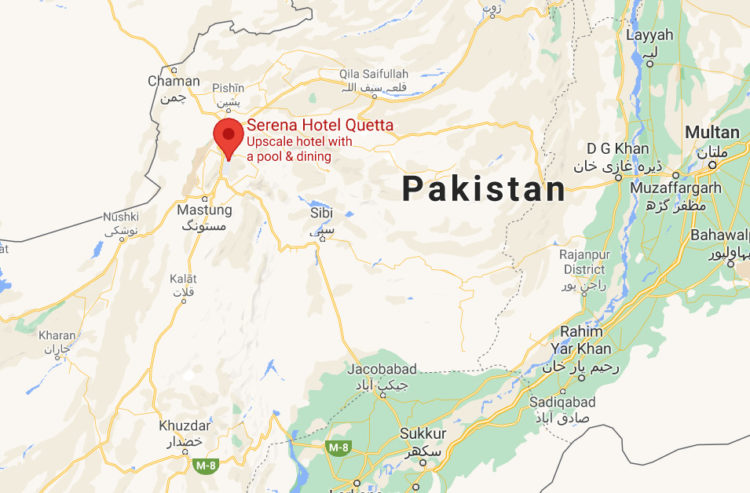 Quetta, April 22 : Four people were killed and over a dozen others injured when an explosive-laden vehicle exploded inside the parking of Serena hotel in Quetta, capital city of Pakistan’s southwest Balochistan province Wednesday night, the country’s Interior Minister Sheikh Rasheed Ahmad said.

There was a threat alert in Quetta and other major cities after some suspicious calls were intercepted, and security was on high alert including cities in Balochistan, Rasheed told Xinhua.

He said that despite the security measures, the vehicle carrying explosives managed to enter the parking lot from the main gate of the hotel, which is a matter of big concern and the responsible people will be taken to task for creating security lapse which gave terrorists a chance to carry out the attack.

Chief Minister of Balochistan Jam Kamal hinted at involvement of some “foreign hand” in the attack and said that the elements which do not want to see Pakistan prospering are in search of a loophole in the security of the province, and launch attacks when they succeed in finding any.

Proscribed organization Tehrik-i-Taliban Pakistan claimed the attack in a text message to journalists saying a suicide bomber launched the attack targeting locals and foreigners, but the claim has not yet been officially confirmed.

The injured were shifted to Civil Hospital whose spokesman Waseem Baig told Xinhua that two of the injured people are in critical condition and a state of emergency has been declared at the hospital by the provincial government.

Intelligence sources from Quetta told Xinhua on condition of anonymity that one security guard was killed and two policemen were injured in the attack.

Soon after the blast, the hotel’s parking area located in its premises was sealed by the counter terrorism department of police who also restricted media to access the site for reporting, Inspector General Police of Balochistan Muhammad Tahir Rai said.

Home minister of Balochistan told media that a bomb disposal squad reached the blast site to investigate into the incident, and according to initial investigation, some 40 kg of explosives were used in the attack.
Fire erupted in several vehicles following the blast, badly destroying five to seven of them, he added.

Talking to Xinhua, intelligence sources, who were close to the hotel when the incident happened, said that the loud blast was heard many miles away from the blast site and fire erupted in the hotel’s parking following the explosion.

Security has been beefed up in other cities including Islamabad following the blast and all sensitive government buildings and installations are being guarded, according to local reports. Enditem