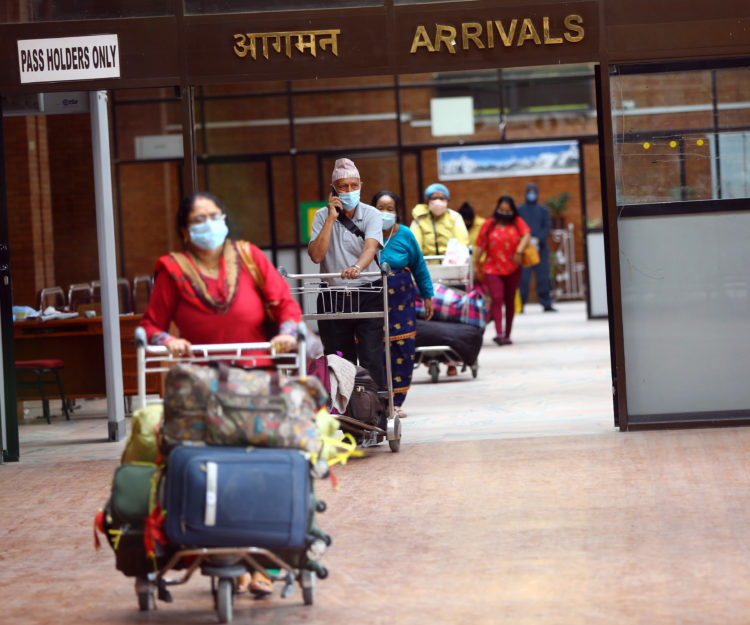 Kathmandu, June 5 : The government has started a process to bring back its citizens from aboard as part of its first phase evacuation drive.

A total of 26 Nepali nationals have arrived Kathmandu from Myanmar at 11:00 this morning. Similarly, Nepali nationals living in United Arab Emirates (UAE) are to be repatriated in the second phase.

A total of 168 Nepali citizens are in ready position to come back to Nepal. A programme has been set to bring them back this afternoon once all the necessary preparation involved in the process completes.

Similarly, 43 people including two Nepalis are returning Myanmar via the same aircraft. The Nepali nationals rescued from abroad would be directly taken to holding centers from the airport.

The government has arranged nine holding centers to keep the returnees for coronavirus safety reasons. The Nepali nationals have been brought back from Myanmar after they tested negative for coronavirus.

The Ministry of Health and Population would carry out their necessary health tests in Kathmandu with the help of Nepal Army. Three holding centers have been constructed in Kathmandu, two in Lalitpur and one in Bhaktapur.

The responsibility has been designated to the Nepal Army for the management of holding centers, said NA Spokesperson Bigyandev Pandey. Two holding centers have been kept in ready position. The abroad returnees of state-1 and 2 would be kept separately.

All holding centers have been managed in a scientific manner adopting the international standards. A team comprising specialist doctors would be deputed at the centers.

Priority has been given to the people whose visa has been expired, students who have lost their job, employees who had gone abroad to participate in training and seminar, among others to bring back to home.